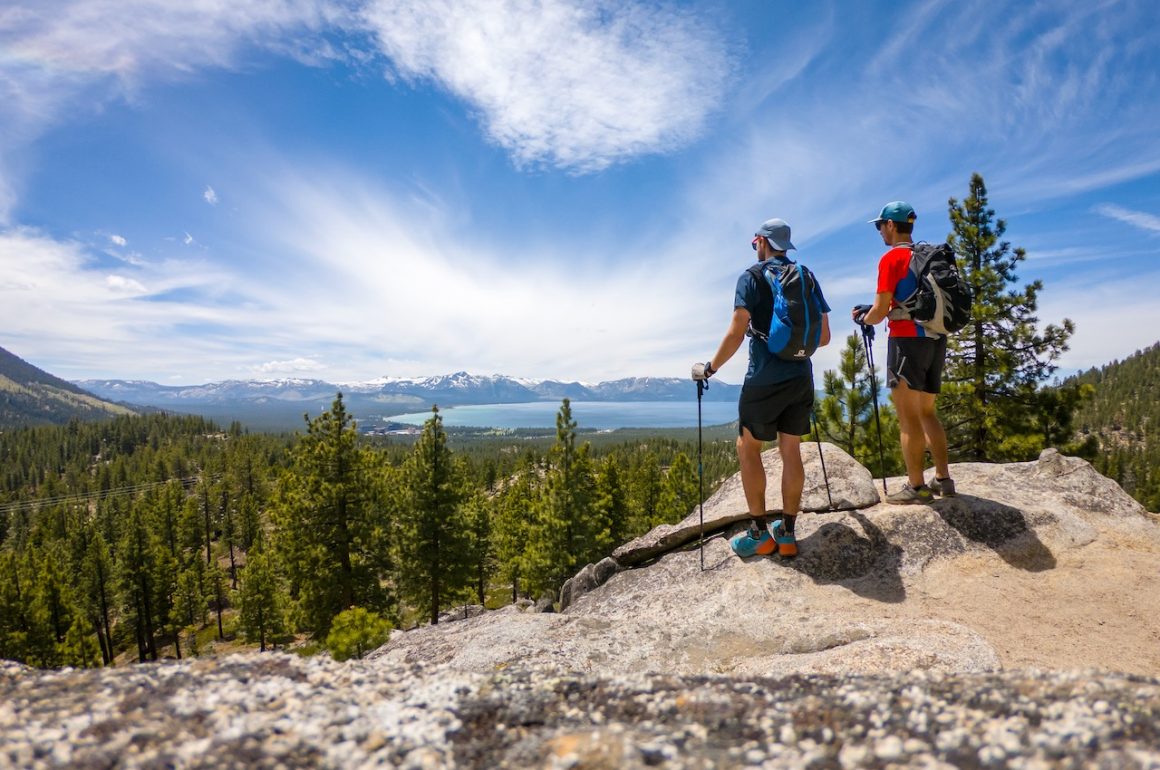 Watch the 45-minute documentary on YouTube of our experience on the trail.

We started from the doorstep of our hotel in South Lake Tahoe with plans to run to Showers Lake where we’d setup camp for the first night in our bivy sacks. While we’d be covering 62 km with 2,450 metres of elevation gain, the trail is known to be quite runnable so we expected our day to take no more than 10 hours.

We were carrying supplies for the first 3 days of the trail, along with our ultralight camping gear, having dropped off a resupply of food at the halfway point in Tahoe City the day before.

Everything started out just as planned, but we hit deep snow by mid-day above 8,000 feet which slowed our progress significantly as we side-stepped long stretches of icy slopes and negotiated deep river crossings while constantly route finding with the help of a GPS watch – just a taste of what we could expect in the coming days. 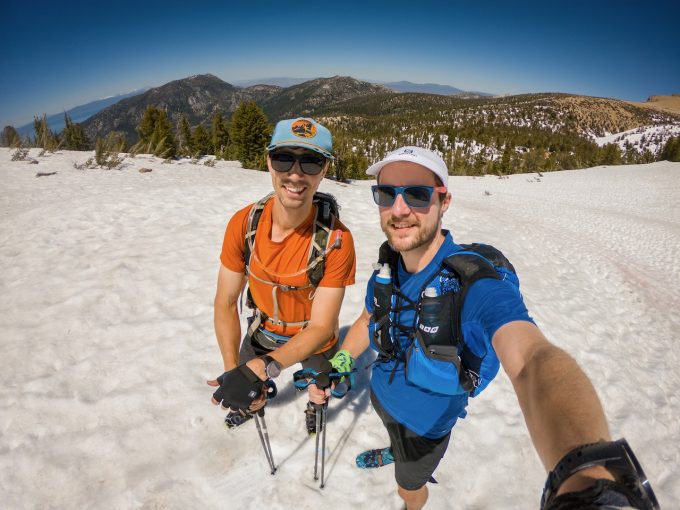 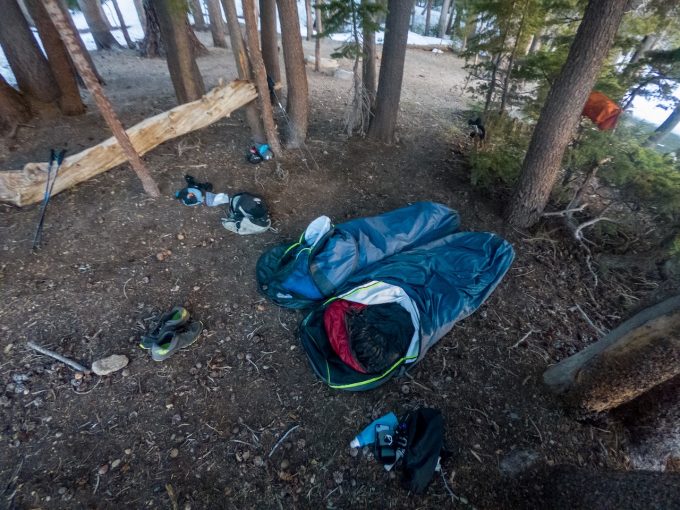 We finally arrived exhausted some 15 hours later at 11pm and began our search for a snow-free patch of soil to setup our camp, before settling in to a cold and restless sleep alongside the frozen lake.

We got up at dawn to tackle what would prove to be another long day. Our goal had originally been to make it the 66k to Barker Pass, passing through the Desolation Wilderness, one of the highlights of the route. But after making such slow progress the day before, we knew we’d likely have to readjust our expectations.

The morning was spent traversing sun-cupped snow fields as we made our way to Echo Lake. We stopped to buy ‘lunch’ from the chalet, consuming at least 1,000 calories of pop, chips and chocolate bars to energize us for the journey ahead. We were offered a short respite from the snow as we climbed from Echo Lakes but, before long, found ourselves once again navigating through deep snow as we passed a series of beautiful lakes and sweeping, panoramic views. 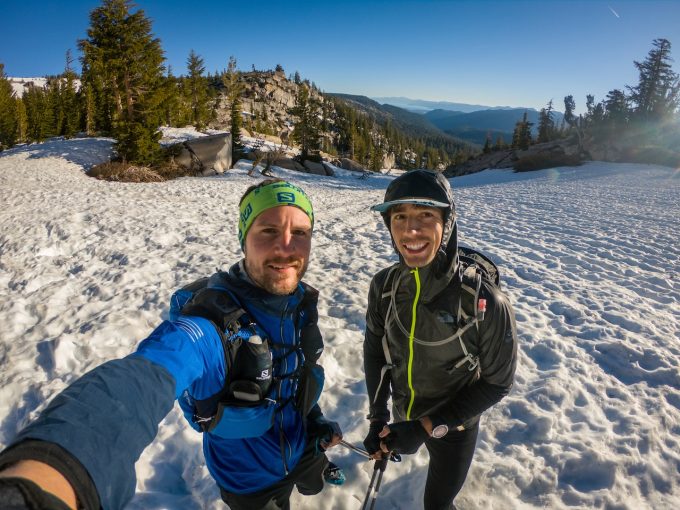 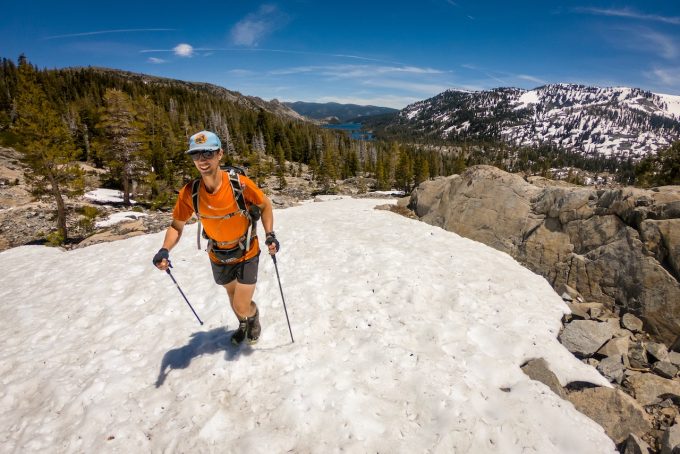 The trail climbed high to Dicks Pass, giving us a glimpse on the other side of what laid ahead. But the immediate challenge would be to safely descend to Dicks Lake below. We relied entirely on our Hillsound Equipment crampons as we kick stepped and slid from tree well to tree well down the steep slope. We eventually stopped for dinner as the sun began to set, ensuring we’d have the energy to push well into the evening.

Having successfully negotiated several difficult creek crossings, we finally reached one that we simply could not find a way across under the guidance of our headlamps. In drier months, this creek would likely be no more than a trickle, but with the high snow pack quickly melting it was at least 10 feet wide appeared 6 feet deep. After wasting 45 minutes wandering in circles on the snowy banks, at close to 11pm we finally admitted defeat in hopes that a few hours sleep and daylight would help us find a way. It had taken us over 16 hours to cover 52k.

We were back on the trail by 7am. With a bit of rest and the light of day, we were now easily able to cross the creek that had thwarted us the night before.

We’d originally aimed to resupply on food and gear for the final few days in Tahoe City around lunch time, about halfway to Watson Lake where we planned on camping for our third night after covering 47k. But given that we had fallen about 14k short of our goal the day before, we knew it would be closer to dinner time by the time we made it to town, and would now have to cover a total of 61k in order to get back on track. 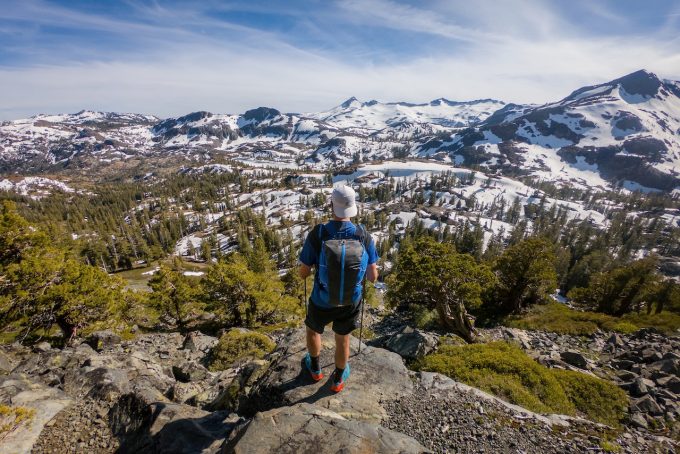 Progress was once again painfully slow as we struggled to navigate and slip our way through the sun-cupped snow, covering as little as 1-2 mph while traversing the steep, slushy slopes. As afternoon approached, it became clear that we were at risk of missing our re-supply when the store closed at 6pm where we’d left our bags. Fortunately, our friend Hilary was in the area and was able to pickup and stash our drop bags outside for when we arrived later that evening.

After finally descending from the rim, we were rewarded with several miles of glorious, snow free running. We finally made it to town shortly after 7pm after 12 hours on feet, mentally exhausted and a half-day behind schedule. We’d now covered 100 miles of the trail, but there was little chance of hitting our target for the day. We decided to call it a day so we could re-evaluate in the morning after a solid meal and a decent sleep in a warm bed.

After a good night’s sleep in Tahoe City we caught a ride to Brockway Summit to pickup the rest of the trail. In order to get back on schedule, we’d skipped about 30k of mountain bike trails which ironically would have been the most dry trail we’d seen in days.

This next leg promised to deliver the best views of Lake Tahoe yet, but it wasn’t long before we were back in the snow, sidestepping across slushy slopes. 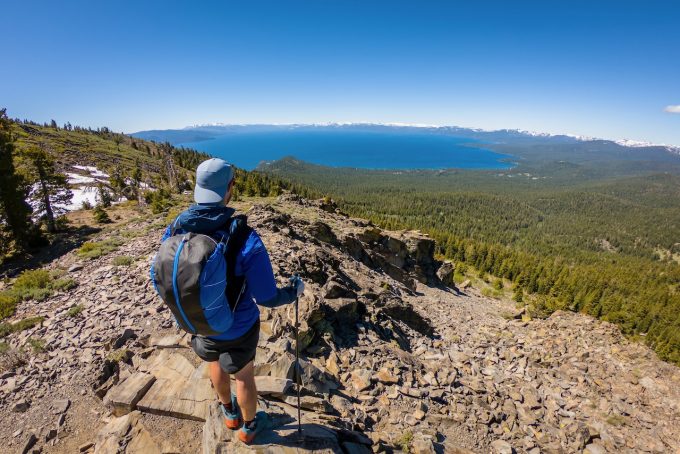 The climb to Relay Peak at 10,335’ would have been difficult on any day, but the snow certainly didn’t help. We spent several hours inching our way up and across what our GPS claimed was a trail deep under the snow, and while it did make the summit feel that much more rewarding, the heavy winds kept us from enjoying it for too long!

The decent off the backside of the ridge would have been a glorious boot ski had it not been for the deeply sun cupped snow. Instead, we tripped and rolled our way down the best we could, until at last we reached a dry patch of soil and a creek where we could break for lunch. 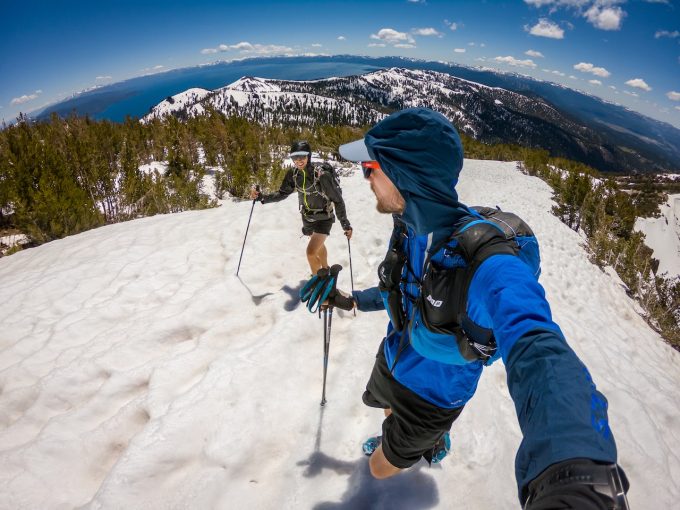 We eventually reached the highway crossing at Mt. Rose at 7pm with 15k left to Spooner Lake, our goal for the day, having covered less than 32k in almost 10 hours. Camping was restricted between here and Spooner, so it would be all or nothing.

It wasn’t a difficult decision to instead hitchhike back to South Lake for a meal and a warm bed. We’d had plenty of ‘Type 2’ fun for one day! The trail would be waiting for us tomorrow.

We caught a ride back from South Lake to the Spooner Lake trailhead which had been our destination for the day before. We had skipped the last 15k of what would have been mostly snowy trail.

Now it was time for our victory lap, as we covered the last 35k of beautiful, dry single track back to where we had started 4 days earlier in South Lake. 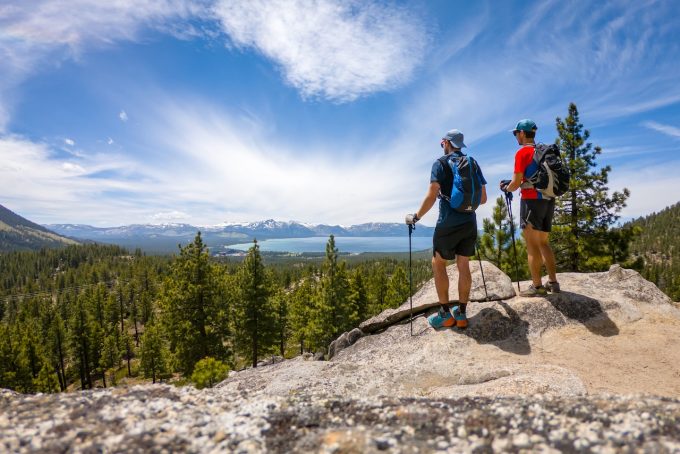 It sure was great to run! All we could keep thinking was that THIS is what we could have enjoyed for the entire 5 days on the trail, had we only delayed our trip by a few more weeks.

We rolled into town early afternoon and began our celebrations. We’d managed to cover 227k of the 281k we’d planned over the 5 days which, given the conditions, we were perfectly happy with.

I definitely don’t regret doing the trail when did. It may have been more adventure than we’d bargained for, but it was also the training I needed. It’s also given me a taste of the Tahoe 200 mile race which covers much of the same trails. So maybe I’ll be back sooner than later!

Our Gear for the Tahoe Rim Trail

In this video I talk about both what worked and what didn’t, and where I might try to improve in the future. All the gear I mentioned in the video is linked to below (with affiliate links):

Watch the 45-minute documentary on YouTube of our experience on the trail.