Sun Mountain Race Report; or 3 Lessons from my First 50 Miler 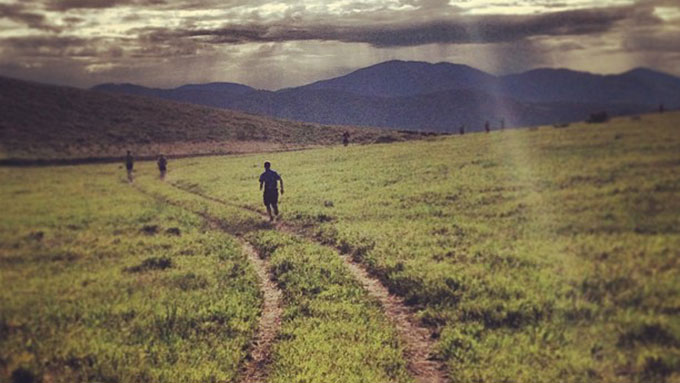 Two weeks ago I traveled to Winthrop, WA to run the Sun Mountain 50 miler. Since moving from road to trail about this time last year, I had run a few 50 km ultra marathons but this was my first time running anywhere close to 80 km. 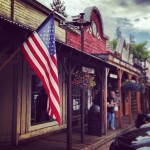 The race was a huge success for me and I finished in 8:49 for 16th place, despite several of us taking a wrong turn that may have cost us 15 minutes or so and adding a couple of miles.

My goal was to finish feeling strong, to enjoy the experience, and to learn a little more about myself and about running into what had been unknown territory.

Here are the 3 lessons I learned…

For once, I can honestly say that I executed my nutrition plan perfectly. Consuming a targeted 100 grams or so of carbs per hour meant a gel every half hour plus close to 500 ml of an electrolyte and carb drink. I supplemented this with a couple of salt pills per hour, just in case. 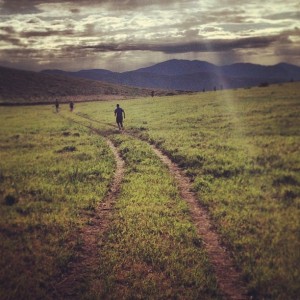 Early on in the race

Along with a little extra at each aid station, I figure I consumed somewhere around 8-10 liters of Gu Brew and some 15 cups of coffee worth of caffeine from the gels (which explains why I felt not only fairly well hydrated but energized well into the evening after the race).

I used two water bottles – one hand-held – that I refilled at each water station (every 7 miles or so). I find bottles much easier to refill than a pack bladder, with the added benefit of being able to more easily monitor your intake. But I did use a Salomon Advanced Skin S-Lab pack to hold my second water bottle, some gels, and my camera.

Since I rely on hydration for a large part of my carbs, I can’t simple ‘drink to thirst’ as many runners do. It has caused me problems during the colder winter months when I feel the need to drink much less, leading me to feel light-headed after a few hours from lack of calories.

This was fortunately not an issue on what was a very warm day on Sun Mountain as expected. Now I just need to remember this lesson and force myself to drink those carbs, whether I’m thirsty or not!

The plan was to get to 50 km feeling as fresh as possible, since I’ve become pretty comfortable (both physically and psychologically) with that distance. From there, I figured I would pick it up for the next 20 km and then suffer to the finish. 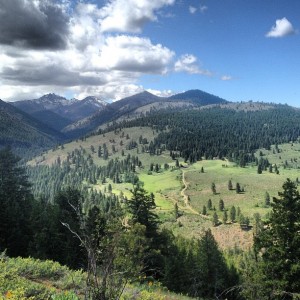 View from the top of Sun Mountain

I hiked most of the bigger hills early on and stretched my hamstring a couple times when I could to help manage a recent injury. The course was quite stunning and before you knew it we had joined the 50 km and 25 km runners who started a few hours after us.

I had to force myself to slow it down a bit as we tackled the big climb up Sun Mountain, one of four in the 7000 feet of elevation gain. The 50 km mark came and went and with it a 50 km PB, after which point every step marked a new furthest distance run.

I began to fade a bit but found a second wind by around 65 km and finished really strong, passing a ton of people in the final miles through the last few climbs, feeling as though I had only run half that distance and that I could have kept going.

I probably could have pushed the pace a little, having in retrospect maybe paced myself for closer to a 100 km race, but there is something to be said for enjoying yourself through close to 9 hours of running!

…Well, maybe not new shoes, but the ones I ran in weren’t exactly mine. Let me explain:

Something I’ve been struggling with in these longer distances is finding the right shoe. I’m a mid-foot striker and prefer something lighter but I seem to either blow out the sides of shoes which are too soft or get discomfort from those which are too structured.

After the pair of Inov-8 Trailrocs I had planned on using self-destructed in last month’s Yakima 50k, and then subsequently having destroyed a pair of Sportiva Crosslites which were in their final miles on a training run, I was left with an old pair of Sportiva Raptors for Sun Mountain which I find pretty uncomfortable for more than a few hours at a time. 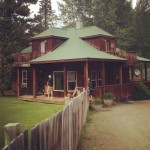 Our home for the weekend

Two weeks before the race I had the opportunity to demo a pair of Salomon Sense Ultras for a couple of hours while doing course sweep at 5 Peaks Golden Ears and they felt great: Super lightweight, form-fitting and fast. I had actually already tried these for an hour or so on the North Shore when my friend and Salomon West Vancouver Shop Team teammate James Marshall lent me his pair to take for a spin a couple of months before that.

Prepping my gear the evening before the race in the cabin that James and I, along with Salomon Flight Crew runner Tom Craik and Vancouver ultra runner Katie Drechsel had rented a few miles away in Mazama, I was beginning to question my choice in shoes. 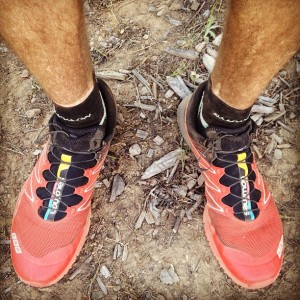 James was quick to offer up his now well-worn pair of Sense Ultras and, after a side by side comparison of comfort and much debate (and a little help from Twitter), I made my decision. The Raptors were demoted to a drop bag to be left at around the halfway point, just in case.

Close to around 95,000 footsteps later I completed my first 50 miler with not a single blister and more comfortable than I had ever felt on my feet for even 4 hours, let alone 9. Best of all, my shoe problem has finally been solved once and for all.

Was it a risky move? Sure, and I’d normally advise against trying anything new on race day. But sometimes running in new(ish) shoes is better than compromising in uncomfortable ones, provided you’ve got a backup plan!

As with all of Rainshadow Running‘s races in and around the Cascades, Sun Mountain offered amazing views and a great vibe (just watch the video). The wild flowers were in full bloom and the weather could not have been better.

I couldn’t have asked for a better experience for my first 50 miler and I’m looking forward to racing it again next year to improve my time – and to learn a little more.

What are some of the lessons you’ve learned? Tell me about it in the comments below! Next up on the schedule is Kneeknacker 30 miler in July which will act as training for Waldo 100k in August – another new furthest distance. Check out more pics from the race on my Instagram feed.