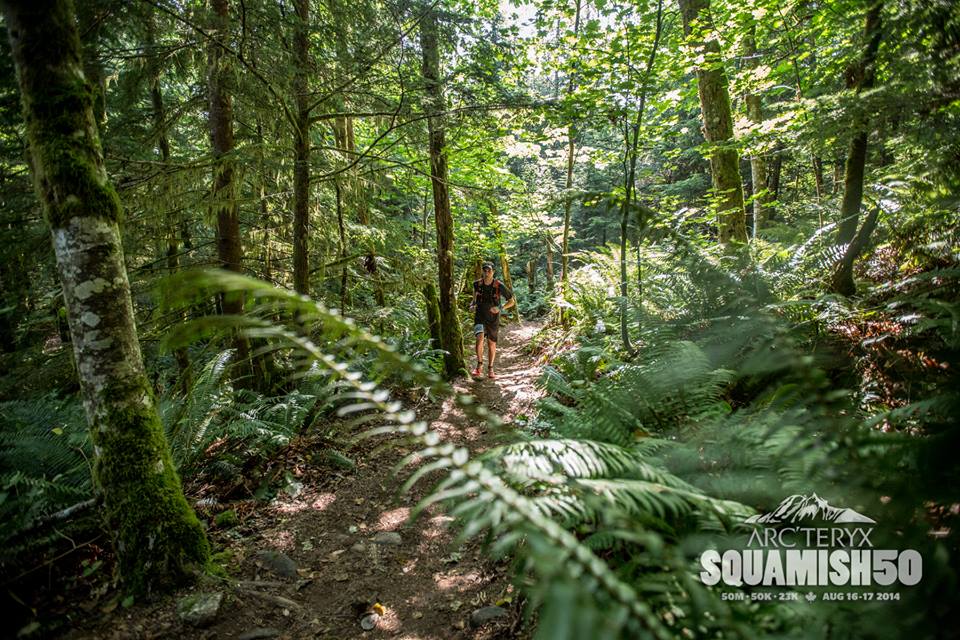 The 6am race start for the 50k was actually out at Alice Lake, a 15 minute or so shuttle ride from downtown Squamish. Tom and I decided to start together at the back of the pack in an effort to both ‘run our own race’ and to not get caught up in the excitement near the front.

The course starts out fairly tame for the first 10k, before beginning a gradual but steady climb which topped out at over 3300 feet. Starting at the back meant that Tom, myself and Chris Price (who we’d run into earlier on) were passing quite a few runners now on the climb which was also a chance to say hello to a few friends I’d missed at the start line, like Gemma, Joel, and Shannon.

The plan was to run about half and walk half of that first climb, keeping it in ‘Zone 1’ and feeling super comfortable, which I managed to do, but both my shirt and shorts were already completely soaked from the humidity. 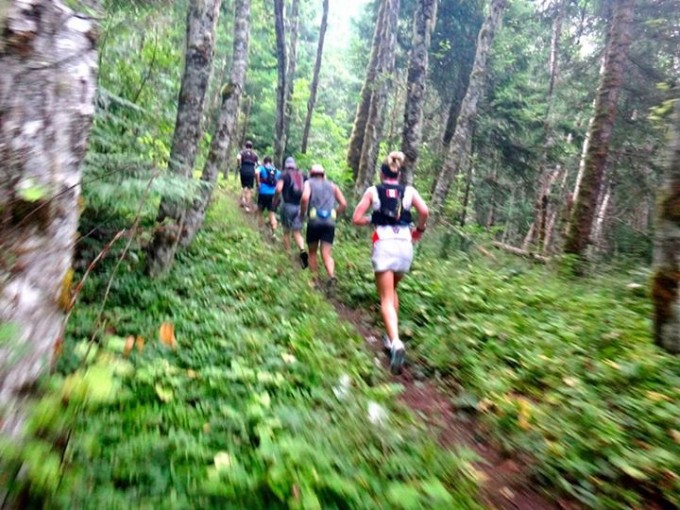 Leading the train up the climb. Photo by Joel Payeur.

The next 10k to the half-way point aid station at Quest University was all about trying to keep up with Tom. As usual, he managed to drop me on the technical downhill stuff and, unfortunately, I never saw him again.

I’d been experimenting with drinking a glass of Coke at each aid station for the caffeine boost which the particular flavour of Clif Bar Shot Gels that I’d been using were lacking. With the aid stations roughly 8k apart or every hour, this meant a glass of coke per hour plus a bit of salt while someone refilled my two 500 ml soft flasks with electrolyte drink, on top of two gels per hour, the occasional Clif Shot Blok, and one Clif Energy Bar throughout the race.

I also kept a third 500 ml soft flask in reserve in the back of my Salomon Advanced Skin S-Lab Hydro 5 Set pack, just in case – the design of the horizontal outside pocket on the back meant that I never once had to take my pack off during the race.

The encouragement of both friends and strangers at Quest was overwhelming and Chloe Gendron who was crewing for Joel and Shannon was a big help in getting me in and out of there quickly as she would be throughout the race.

From Quest to the 4th aid station around 32k, I was having lots of fun as I picked up the pace a little and passed quite a few more runners on the climbs. The terrain was mostly rolling, flowing switchbacks, and I made a mental note to compliment Gary on having designed such an enjoyable course. Not sure what all the fuss was about! 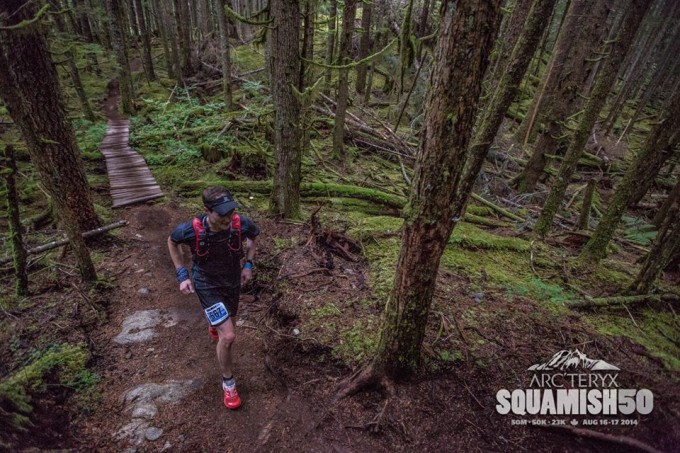 From the 4th to the 5th aid station, the course got a little more technical, but was still a lot of fun. I did my best to hang on through the downhills and I think I only got passed by one runner – the first and last of the day. The clouds were beginning to burn off just as we hit the exposed section of trail, so I was being especially mindful to stay on top of my hydration.

Approaching the last aid station, Chloe told me that Tom was only a few minutes ahead and was apparently slowing down (turns out this was a lie, but thanks for the encouragement). She also broke the news to me that the last 10k was not in fact ‘mostly downhill’ as I had imagined and was in fact pretty technical – understatement of the year.

I’d been feeling totally solid and made up quite a bit of time on the fire roads, but now I was struggling to get back in a rhythm as the terrain began to twist and turn, climbing up, down and back up again to the top of Mountain Of Phlegm. Just when I thought I had made it to the top, the trail would plunge back down before suddenly turning in on itself like an M. C. Escher painting. I’d forgotten what it was like to really suffer in a race, and the next 7k was by far the most difficult running I’d done since pushing through an injury at Diez Vista 50k. Damn you Gary!

A sub-6 hour finish was probably out of reach, but if I could make it to the last few kms of road with enough left in the tank, then just maybe I could catch up with Tom. 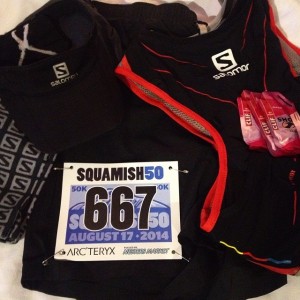 Look at those nice, dry shorts! 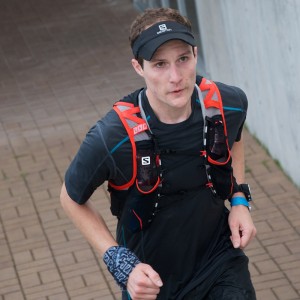 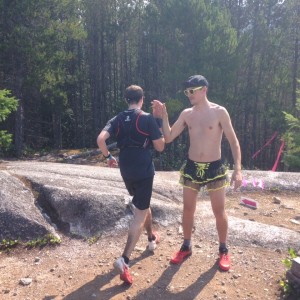 Cheering squad atop Mountain of Phlegm. 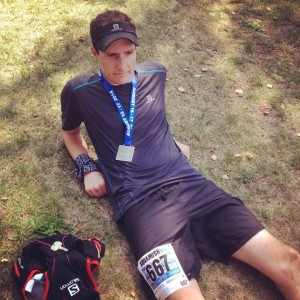 Glad to be no longer moving.

Finally, I was greeted at the top by a cheering squad led by friends Jay (in a tutu) and Solana Klassen who assured me that I was doing well and broke the news that Tom was at least 5 minutes ahead of me. Down I went into The Smoke Bluffs, past the climbers to the parking lot below. It was time for all of the leg turn-over I could muster.

Passing a seemingly endless stream of 23k runners, including Dianna and Kimberly, and Sarah who was course marshalling, I crossed the finish line in 6:15 for 17th place, the ankle feeling 100%, and with a big hug from Gary – I can’t hold a grudge.

Congrats to Tom who finished in 6:07 for 15th place (I’ll get you next time) and to Karl who finished the 50/50 without my having to drag him out of bed! Thanks to Salomon, Suunto, and Clif Bar for gearing me up and fuelling me along the way. Check out the full results here. Header photo by Bryan McCurdy.