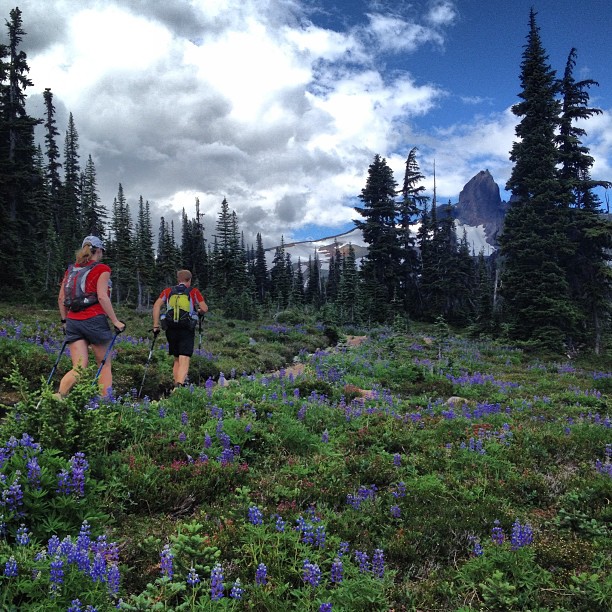 The views from Panorama Ridge are some of the most scenic in the area and certainly the best in Garibaldi Provincial Park, with a full panoramic view of Garibaldi Lake, Black Tusk, and the Helm Lake area. Visiting the park without taking the short detour to the summit would be a real shame.

There are quite a few route options. The ridge can be reached from either the Cheakamus Lake trailhead just south of Whistler or from the Rubble Creek parking lot just north of Squamish. It can be done either as an out-and-back from either point directly to the ridge, or as a point-to-point along the Rubble Creek Classic 25k route by shuttling two vehicles.

In addition to (or perhaps instead of) Panorama Ridge, you could do a summit of Black Tusk, although I hear it gets pretty busy up there and the view looking back at Black Tusk from Panorama Ridge is much more dramatic. A short detour down to Garibaldi Lake is another great option.

We decided to do what seems to be the most popular option for trail runners of a point-to-point, dropping off one car at Rubble Creek before starting the trip from the Cheakamus Lake Trailhead.

It was my last big weekend of training before Waldo 100k a few weeks later and the trip marked my second fairly epic run of the weekend, after having done a loop through Hanes Valley the day before on Saturday. My Instragram feed that weekend was gold, I tell ya!

Starting off from our car at the Cheakamus Lake trailhead, we immediately ran into a group of runners we knew who were doing roughly the same route as us – testament to just how small of a world the trail running community really is, as I’ve learned over this past year on the trails.

After about 1 km of groomed trails, we turned right at a fork instead of continuing on to Cheakamus Lake and crossed a bridge over the river before starting a fairly tough climb through the forest.

The trail continued for about 8 km to Helm Lake through “the heart” of Garibaldi Provincial Park as the scenery began to change at virtually every corner. 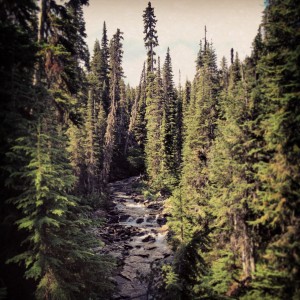 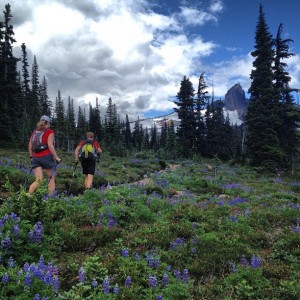 We passed through meadows of wild flowers in full bloom, with mountains and glaciers in every direction and Black Tusk visible ahead.

Eventually, we arrived at the the volcanic landscape of cinder flats near Helm Glacier which felt totally other-worldy and was definitely a highlight of the day for me. Another group of runners passed us as we stopped for a snack and to amaze at the landscape around us.

Looking back at Helm Lake and Black Tusk.

We soon reached a junction for the out-and-back detour up Panorama Ridge. The trail heads down a bit before beginning a climb through the alpine vegetation, snaking its way up the side of a hill onto a ridge where the terrain turns to rock and then to a bit of a scramble. 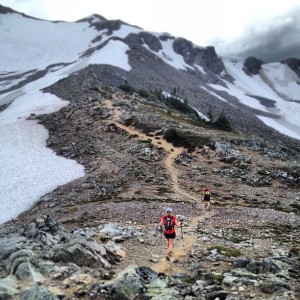 Making our way up to Panorama Ridge. 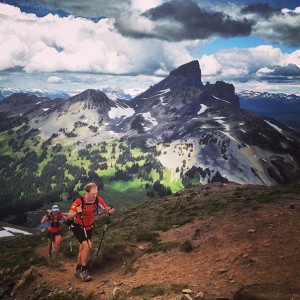 Black Tusk in the Distance.

The trail through this section wasn’t as obvious other than a few markings but, aside from a few wrong turns, we were able to follow the wear on the trail from other hikers. Just as we were nearing the top of the climb, we caught a glimpse of Garibaldi Lake before it came into full view as we crested the top of the ridge. 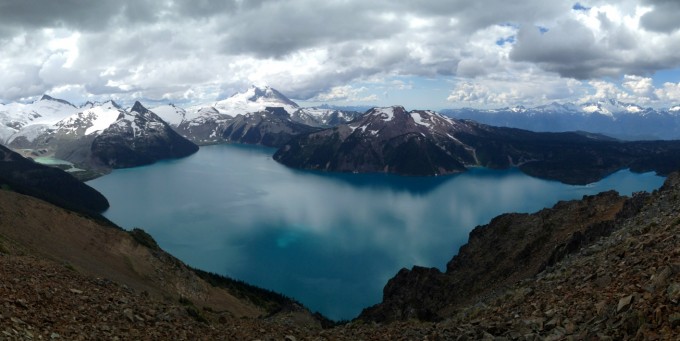 Running along Panorama Ridge to the peak was incredible and felt like being in the Rocky Mountains. The view from the top is literally 360 degrees of lakes, glaciers, and snow-capped mountains – incredible.

We took a few minutes to enjoy the view but were cooling down pretty quickly (and getting attacked by bugs) so it was soon time to head back. But not quite the way we came!

To our right was a broad snowfield that could take us most of the way past the rocks we had to scramble up – how could we resist? The only thing better than running through snow is running down a very steep slope in snow. I can’t even begin to tell you how much fun this was! (although I held back a bit, knowing I had a race coming up in a few weeks) 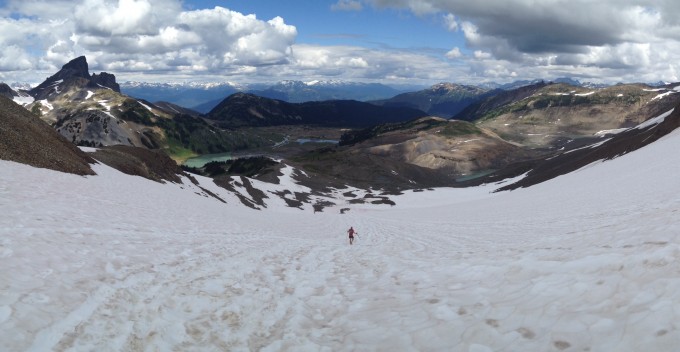 Shortcut down from Panorama Ridge… Steeper than it looks!

Back at the Panorama Ridge junction, we headed left and began making our way alongside scenic slopes, past a series of creeks, towards Taylor Meadows. We hit the lake junction where it was really busy with hikers having made their way up from the Rubble Creek parking lot past Taylor Meadows, and took the detour to the left towards Garibaldi Lake. 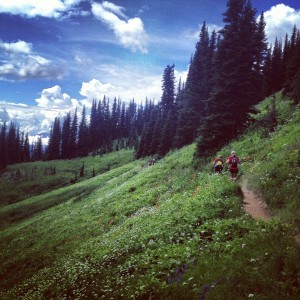 Scenic slopes on our way to Garibaldi Lake. 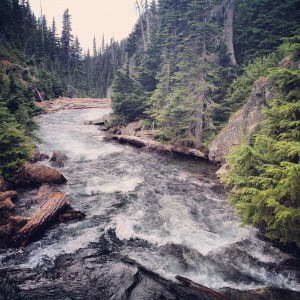 Bridge over a creek at Garibaldi Lake.

The lake was nice although, again, a little too busy. It just didn’t seem right not to have dipped our hands in the water we were admiring so much from above. We followed the trail across a bridge and along the shoreline a little ways before heading back up.

A short climb back from the lake and we were on our way again towards Rubble Creek, past Lesser Garibaldi Lake and Barrier Lake before arriving at the short side trail leading to Barrier Viewpoint – another great view! 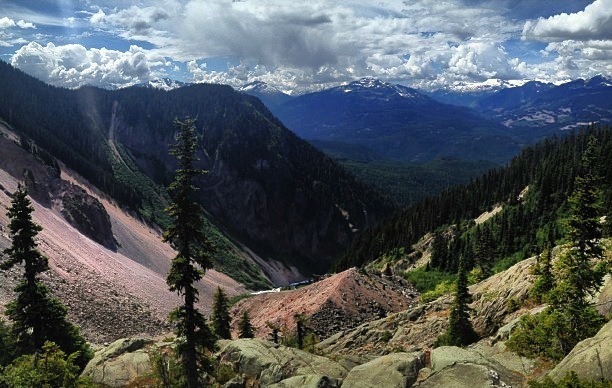 Back on the trail we then hit the junction which, coming from Rubble Creek, would give you the option of heading towards Taylor Meadows or directly to Garibaldi Lake along the parallel route we had just taken.

Finally, we were rewarded with 6km of switchbacks which took us gradually down some 800 metres to the car we had dropped off earlier that morning. I can’t think of a better way to end a long day on the trails than racing your friends past a stream of tourists at 3:30 / km – definitely one of those times when I was glad to be a runner and not hiking.

What a great way to cap off my training before Waldo 100k a few weeks later. I’m really looking forward to heading back to the area to explore some of the other many routes and summits in Garibaldi Provincial Park.

Check out my Hanes Valley trail running trip report from the day before and see even more pictures from the trip on my Instagram feed. Have you hiked or run in the Garibaldi area? Tell me about it in the comments below!