February 5, 2021 by Jeff Pelletier No Comments 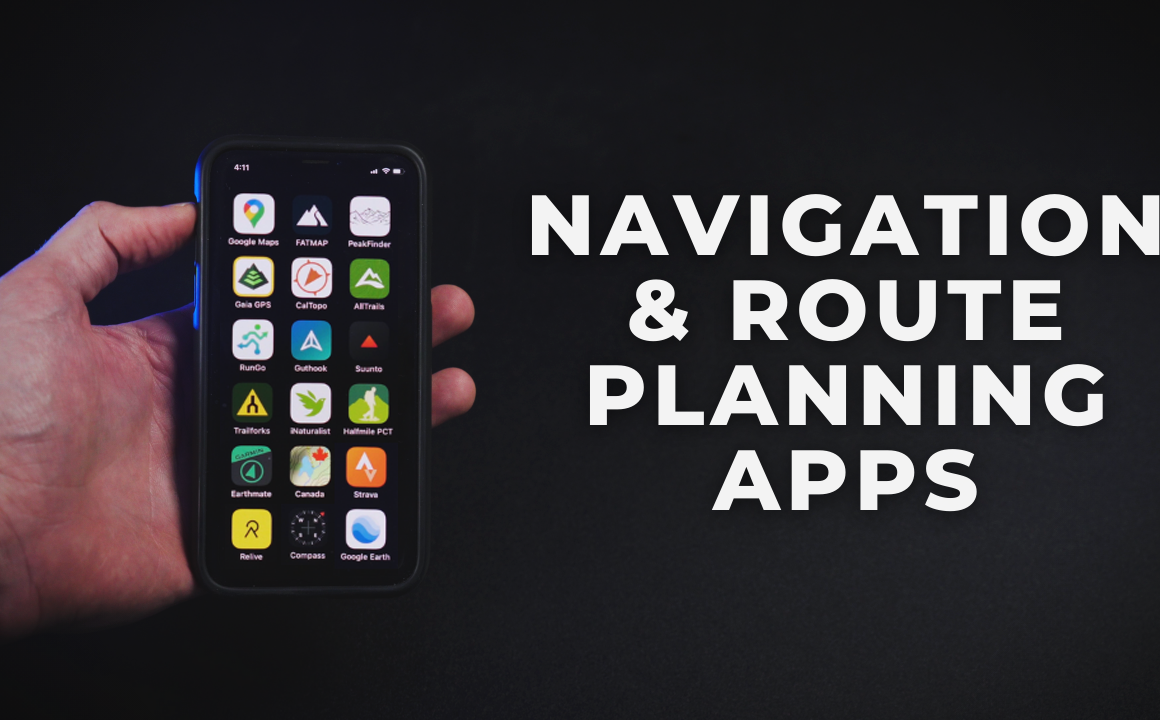 In this post, I’m going to discuss my 5 favourite trail running apps for navigation and route planning, specifically for trail running. I’m not going to go into too much detail on how to use each app, but instead will provide a more high level overview of the features of both the free and paid versions of each, and some possible use cases.

I’ll also highlight a handful of other apps you might want to check out as well which while not on my primary list are all very useful in their own way.

I’d like to start by explanation some terminology. A GPX file is a file format designed for the transfer of GPS data, including waypoints, routes, and tracks, between GPS devices and internet web services.

A GPS watch for example will allow you to record an activity including your track and other data like heart-rate, temperature, and so on. But when you export this data, your watch will create a GPX file.

When using some of the web-based applications I’m going to be covering below, you might encounter other file formats like KML which are designed more for annotating maps like on Google Maps and contain less information than a GPX file. But when it comes to building a route, or importing one for the purpose of navigation, GPX and KML files can be used somewhat interchangeably and can easily be converted using various online tools.

Google Maps has a comprehensive data set for trails created from a variety of sources, including labels for many peak names, so it’s great to have for in a pinch when you just want to identify a fork you might have come across on the trails, or to find your way back to your car when you’ve gotten a little turned around.

Google Maps is a great tool, mainly because it’s free. But you’re not able to do some of the things that other more powerful navigation apps can do, like building or importing existing routes. It is a good tool to have in your toolbox, nonetheless.

Just be sure to always pre-download your maps for offline use before leaving civilization. By doing this you’ll ensure that you’ll not only have the maps ready in case you’re out of cell range, but you can then also keep your phone on airplane mode which will really help with your phone’s battery life. The GPS on your phone still works while in airplane mode, but this ensures it’s not constantly looking for a signal.

FatMap is an app I more recently discovered which is designed primarily for skiing but works great for trail running as well. It’s a really cool way to visualize your terrain in 3D, which is so hard to do by looking just at 2 dimensional topographic maps.

You can add terrain layers to include visualizations of aspects, gradients, and elevation. With the paid version, you can access a ton of other features that would be really helpful for snowshoeing such as snow depth if you have the paid version, as well as the ability to download maps to your phone for offline use.

The web interface works great as well, although I find the app much more intuitive to use by pinching and zooming on the maps. But the web interface does allow you to create custom routes that can then be loaded on the app for use in the field.

Integrate it with Strava, Suunto or Garmin to automatically sync your activities back to Fat Maps so you can explore them later in 3D.

PeakFinder AR is less of a navigation app per se, but such a great tool for peak bagging and one that I use so often, I had to include it in this list.

Simply hold up your phone, align it with a recognizable feature, and the app will tell you all of the peaks that are in view. You can adjust the distance so that it focuses on peaks closer or further away, and you can take pictures with the labels overlaid.

Quick tip – most of the settings can be changed while you’re exporting the photos back at home, including the alignment, so there’s no need to mess around with these in the moment. Just take your shot and worry about it later.

This is a paid app which for me has been worth every penny.

Strava is both a website and app best known for its social features, allowing you to connect with and follow other runners. But it’s also a great tool for getting ideas and beta for routes.

Using the web interface, you can also build, share and export routes which you can then import into other apps like Gaia or to sync to your watch. What I like most about Strava for route buliding is the popularity feature which works even when building a route off trail.

Strava is especially powerful if you have the paid version. It allows you to download the GPX file from of any activity from other users, without having to message the person and ask them to export it for you. I get a lot of these messages on Facebook from friends looking for GPX files of my routes, and this feature was the main reason I upgraded and have continued to renew year after year.

You can of course record runs in-app, but I prefer to record on my Suunto 9 GPS watch and then sync using the Suunto/Strava integration. A watch is more convenient and reliable, will typically have better battery life, and this way I save my phone’s battery in case of an emergency.

Strava does offer in-app navigation, but I while I consider this a great tool for route planning, it’s not something I commonly use while on the trail.

There is also a Beacon feature which can share realtime location data with your family and friends, but this is not only going to really drain your battery but it can’t be relied upon in the backcountry where cell service tends to be sparse. I’d highly recommend instead investing in something like the Garmin inReach Mini if you do want reliable tracking via satellite, along with the piece of mind of an SoS button in case you need to call for help.

Oh and by the way, I am on Strava so in case you’d like to follow along with my training.

Gaia is an advanced, web-based route building tool, that also has an app. With the paid version, you can sync your routes across multiple devices, including your phone. You can then easily use your phone to navigate your routes. Of course, this is possible without paying by exporting from the web version and then importing it manually into the app, but for power users like me, I think paying is a no-brainer, given that the paid subscription also allows you to download your maps for offline navigation which is super important.

Gaia really is one of the most powerful and intuitive route builders I’ve used. You can import and overlay multiple routes which is a really cool way to compare routes and tracks, you can organize everything into folders, and you can make your routes public and share links with your friends.

The reason that Gaia is my favourite app is because of all the apps and resources I use it’s the one product that can do both the level of route route planning in require and navigation really well.

Sign up here for a 20% discount on a Gaia subscription.

CalTopo is very similar to Gaia, offering both web-based application and an iOS app. I don’t have a lot of experience with this, but it functions in much the same way as Gaia when it comes to route building and navigational tools. But it’s definitely not as intuitive to use or as well designed in terms of its user interface as Gaia from what I’ve seen so far.

AllTrails is another super powerful app for discovering routes, or creating your own. You can even record a track in-app. And the paid version allows downloading maps for offline use.

I know that AllTrails is the go to app for many trail runners and hikers. I’ve just never personally found a need for it amongst the other applications I mentioned previously, but it’s definitely worth checking out, especially if you’re looking for some new trails to explore.

Google Earth, like FatMap, can be used to visualize terrain in advance using either the web interface, dedicated desktop application, or with the mobile app. The web interface and desktop app both allow you to import KML files or to create projects from scratch. And the best part, is that it’s free to use.

I still prefer Fat Maps myself though, given that it’s designed specifically for this use making it lighter and quicker to use, as well as having so many additional data layers relevant for mountain navigation.

RunGo which was developed right here in Vancouver, provides turn-by-turn audio directions while on the run and even has an Augmented Reality feature. It works especially well for road running and for urban trails when you’re visiting a new city, as it allows you to easily discover and follow routes nearby.

Guthook is an app used by many through-hikers for hikes like the PCT. It shows not only the route, but each trailhead, campsite, water source, and other data, with user-submitted updates. We used it for our fastpacking attempt of the Tahoe Rim Trail and found it super helpful in locating water sources.

While the app is free, it does cost money for each route, so is really designed more for longer through-hikes or fastpacks where it makes sense to invest in downloading the data for a single route that you’re going to be using for days or possibly weeks at a time.

The new Suunto app is a really great way to create routes which can then be synced instantly with your watch, and loaded for you to follow along with. The old Movescount software from Suunto left quite a bit to be desired, but I think that Suunto really nailed it with this new app.

I personally use this all the time, but of course it’s going to really only be useful if you in fact own a Suunto watch which is why I didn’t include it in my main list.

Design routes on the fly or import existing routes to upload to your watch. And like with Strava, you can record runs in-app or use it to sync your watch after a run over Bluetooth, and then in turn have it automatically post to Strava for you.

And last but not least, the compass App which comes built-in to both iSO and Android devices. While this shouldn’t be relied upon as a replacement for a physical compass when navigating by map and compass, it can be used in a pinch for orienting yourself.

The feature I really want to point out about the compass app is that it will provide your GPS coordinates which can be super important in case of an emergency. If you do find yourself having to call for help, being able to provide your location to Search and Rescue is really important.

What about Paper Map & Compass?

Now I do want to stress that while navigation apps and a GPS watch are great supplemental tools, they are not a replacement for carrying a paper map and compass which I typically do as a backup, especially when I’m running in a new area and when in the backcountry.

Learn more about the trail running essentials that I always carry in the backcountry.