December 31, 2020 by Jeff Pelletier No Comments 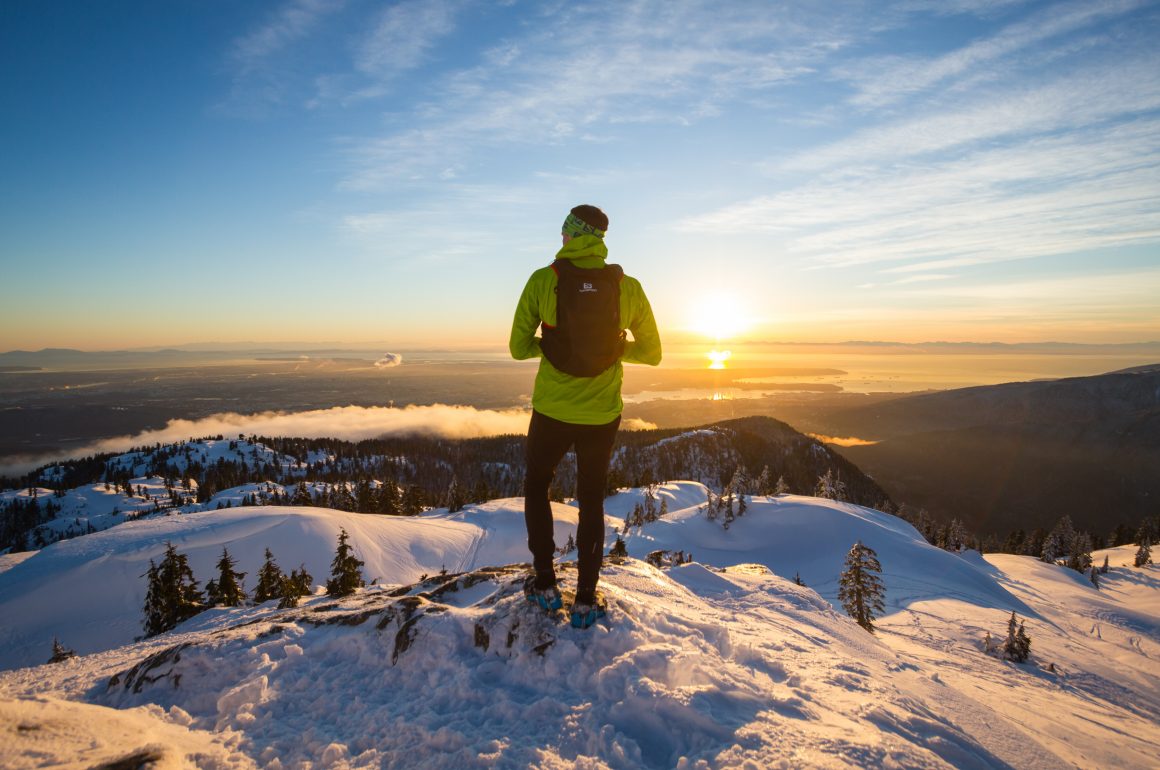 Winter can still be a great time to hit the trails. But when the temperatures drop and the snow begins to fall in the mountains, the gear we use needs to change as well.

In this post, I cover some of the winter trail running gear that I rely on, along with a few tips for staying safe in the snow.

In the summer, it’s pretty easy to dress for trail running. I tend to get pretty warm so I generally wear as little as possible, maybe just short and t-shirt, along with a waterproof jacket in case it rains.

In the winter though, I’ll typically wear pants instead of shorts, and I’ve found there are two great options to choose from.

The first is a good pair of waterproof pants, like the Salomon Bonatti WP pant which can be worn on their own or overtop of shorts. What I like about these is that they’re light and breathable enough for those days where temperatures are above freezing and where you’re dealing more with cold rain instead of snow. They can also be easily packed away in case you just want to carry them as a backup.

But for colder temps I’ll switch to an insulated pair of pants, like the Softshell Pants currently available from Salomon.

I personally prefer these over regular running tights because they’re not only warmer but less revealing a little more comfortable given that they’re a little looser.

On top, I like to layer. Instead of a long sleeve shirt, I’ll usually just wear a regular t-shirt along with a pair of arm warmers, or just a long-sleeve shirt. I’ll then carry either a softshell jacket or a waterproof hardshell, like the Salomon Bonatti WP jacket.

Hardshells are great not only of course in case of rain, but also because they tend to be a lot warmer than a wind breaker and therefore make a better insulating layer.

When it gets really cold, I’ll again turn to Salomon’s nordic skiing line, and something like the Salomon RS Warm softshell jacket. For even more warmth, I might layer it over a thin Icebreaker merino wool longsleeve.

As a backup, I like to pack a lightweight, compressible down jacket as well, like the Arc’teryx Cerium SL. This is something I’ll pull out once I’ve reached a summit, or any other time I might be taking a break to grab photos or to have a snack. It can also a critical piece of safety equipment, should I find myself having to slow down or stop for a significant amount of time. Just remember to keep it in a zip lock freezer bag to keep it dry.

Carrying a spare never hurts in case you want to wear it around your neck or pull it up over your face like a balaclava.

My hands get cold really easily as well, so gloves are a must for me even in the fall. I’ve tried a ton of different options, and will usually start with a lighter weight pair but I’ll pack a heavier pair just in case. Bringing a spare pair is also great again for those days when temperatures are above freezing and it’s pouring rain.

Even waterproof gloves are going to soak through eventually, so on longer days I’ll keep a spare pair of gloves in a zip lock bag. And a set of chemical hand-warmers never hurt, just in case.

A lot of people like to wear Gortex shoes in the winter to keep their feet dry, but here’s the thing – snow and water is still probably going to get in from the top anyway and then will have nowhere to go.

They’re also less breathable and can therefore be too warm at other times of the year. So instead, I like my shoes to be quick draining and breathable.

When running in deeper snow I’ll then pair them with some Gortex Socks like the ones from a brand called Rocky. They’re not cheap, but I’ve had this pair for years now and they’ve been worth every penny. Wear some regular warm socks underneath to keep your feet not only dry but nice and warm.

I am though becoming a big fan of shoes with built-in gaiters like the Salomon S/Lab Sense 8 Softgrounds, or the new Salomon S/Lab Cross which I’ve been testing out for the past couple of weeks. This can help to keep out not only dirt and debris, but snow as well.

You can find trail running shoes with built-in spikes which allow you to run safely in icier conditions. But I find conditions to be a little more variable where I run in the winter, often including a mix of ice, snow, rock, and maybe even some pavement.

So instead, I’ll pack a traction device that I can put on only when necessary. My favourites are the Hillsound Trail Crampon Ultra. I’ve found these to be the most durable, and they have a strap across the top that holds them more firmly in place than some of the competitors.

There are a few models available, but the ultra are the lightest and are designed specifically for trail running. But if black ice is your primary concern, then check out the less aggressive Hillsound Flexsteps which are chain-free ice cleats designed for icy sidewalks and roads.

I’ve got another post which covers all of the usual trail running essentials that I’ll carry during warmer months, and the winter is no different. But keep in mind that the days are shorter, making the need for a headlamp and possibly a backup or spare battery even more important than ever.

I’ll always carry an emergency bivy sack as well, instead of just the small emergency blanket that I might be able to get away with in the summer.

Remember to stay on top of your hydration. I find I have to really force myself to drink water in the winter since I’m not sweating as much, but when I don’t I can end up getting really dehydrated. And don’t underestimate the power of the sun in the winter.

On a sunny day, snow can reflect up to 90% of UV radiation, meaning you can end up being exposed to almost a double dose – directly from the sun and reflected off the snow. This can very quickly lead to snow blindness and burning of your eyelids and other places that might not normally get direct sun.

Trust me that forgetting to wear sun glasses and sunscreen when running through the snow in the alpine on a blue bird day is a mistake you’ll only make once.

Watch a video covering all of the gear I mention here below. Is there any other gear that you rely on in the winter that I missed? Tell me about it in the comments below!