Pre-Race Briefing at the Hilton.

The plan was to have Ashley lead, then Phil, myself, Gemma, Arden, Munny, and Micki to cross the line – beating the other relay teams (and possibly the solo racers) including Team Helly Hansen who were victorious last year.

I won’t go into detail on the other legs of the race, since I haven’t run the whole course myself. But I can summarize my leg in one word: Upness.

I really love to climb and I consider it a relative strength of mine. I can open it up when I have to, coming from a road running background, but I find the technical descents particularly challenging so I put in an early request for leg 3 (and for anything but leg 4).

The race got underway from Rebagliati Park at 5am and Ashley managed to complete the technical (and dark) first leg of the race in 45 minutes for 2nd place. I didn’t see the hand-off to Phil but we heard that Ashley was almost 15 minutes ahead of schedule so we rushed to the next hand off point at the base of Blackcomb so that I could warm up and get ready for my leg. 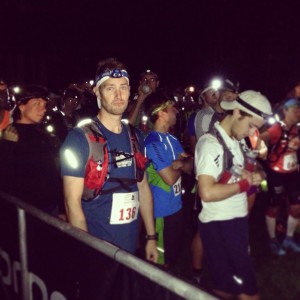 My friend Karl having 2nd thoughts. 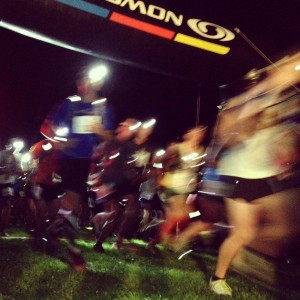 At around 7:46, three figures emerged from the forest and came barreling down the mountain, neck and neck. It looked to be Adam Campbell in 2nd place after Jakub Sumbera but turned out to be Phil, with Jason Loutitt in third. I grabbed the timing chip from Phil and started making my way directly up the ski run in 1st place with Jakub 100m or so behind me.

The climb got very steep pretty quickly so I switched to more of a fast power hike which is something I’ve practiced a lot of this year. Instantly anaerobic, increasingly lactic, I settled into a heartrate of around 180 bpm and decided I’d try to keep it there.

I managed to hold on to the lead for quite a while and I was definitely running scared. It felt great to lead a race for the first time – it might be a while before that happens again.

Somewhere near the top of the climb as the trail transitioned back into road and became more runnable, I was surprised to see solo runner (and eventual overall winner) Jakub gaining ground and looking strong. I tried my best to hang on and keep him in view once he passed but I lost him as soon as we hit the technical climb through the trees – out of sight, out of mind. Fortunately, I still seemed to have a pretty good lead on third place.

View from the Top.

We finally hit the alpine trails and were rewarded with some pretty amazing views through the last couple of kms. I think we took a few people by surprise being there so early, but Robert Shaer managed to grab a great pic (top of this post) before the chair and aid station came into view below me. I could hear Gemma cheering as I tried to give it my all down the final descent. I made the hand-off and started coughing up a lung.

The rest of the team killed their legs and Munny actually won his overall. Our team came 1st with a new relay record of 7:57:49 (guntime). But amazingly, we were beat by two solo runners: Salomon runner Adam Campbell who finished in 7:46:07 and Jakub Sumbera who set a blazing fast new course record of 7:38;19. 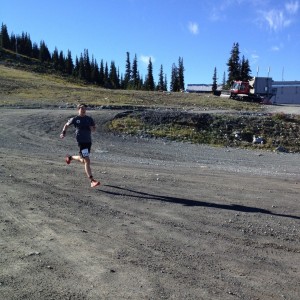 Coming in for the hand-off. 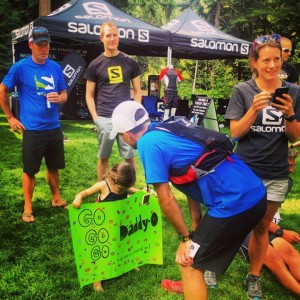 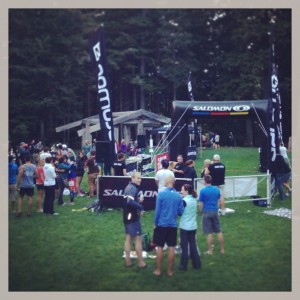 The last runners coming through the finish line. 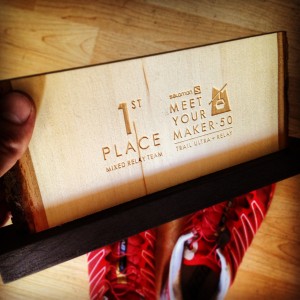 The aftermath: I continued to cough (up phlegm) for the next day or two, evidence of a little exercise-induced pulmonary edema. I suppose I’m used to spreading out the suffering over a much longer distance, not sprinting up mountains in short races like this. But it was well worth it and I’m looking forward to doing it again at 5 Peaks Buntzen Lake in a few weeks!

Congrats to Karl Woll and teammate James Marshall who both finished their first 50 milers, and to Salomon Flight Crew runner Tom Craik for an impressive performance as well. Special thanks to the team at Salomon Canada for having me on the team and to Salomon West Vancouver for their on-going support!