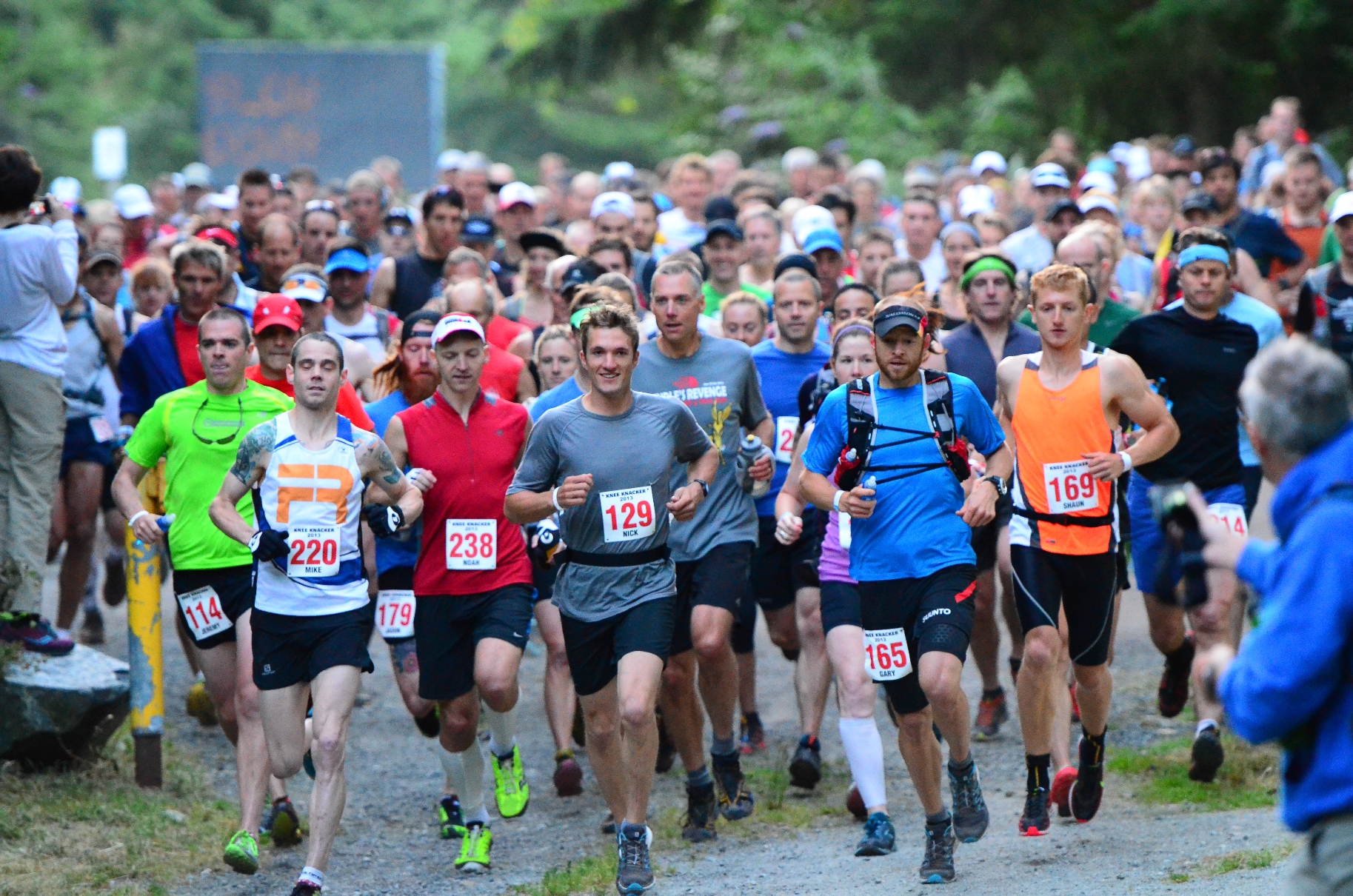 In just over a week, many of the top local runners will be lining up to run on some of their favourite North Shore trails. The Knee Knackering North Shore Trail Run (or Knee Knacker for short) takes runners from Horseshoe Bay to Deep Cove on the Baden Powell – 16,000 feet of vertical climb and descent along 30 miles of technical trails.

The race is hugely popular, with almost 400 entrants competing for 200 spots in each year’s lottery. I wasn’t lucky enough to get a spot this year after running it last year for my first time, but you can bet I’ll be trying again next year.

With so many great runners signed up this year, it would be impossible for me to try to predict a winner, and the nature of this particular race is that anything really can happen on the day. I did manage to connect with 3 particularly fast local runners though to discuss their strategy and goals for this year’s race; Oliver Utting, Graeme Wilson, and Mike Murphy.

How long have you been an ultra-runner and how did you get into it?

Oliver: I think about 8 years, I started with 5 Peaks races and other local trail races. I felt like I needed a change from road racing, although I still enjoy road racing too.

Graeme: I completed my first ultra in May of this year, the Sun Mountain 50 miler… so officially, I’ve been an ultra-runner for hmmm, what’s that, about two months now?  I attempted a few ultras last year, but didn’t quite make it to the finish line (Knee Knacker and Meet Your Maker 50 miler).

I started running later in life, in my 30’s, and seemed to gravitate toward the road marathon distance straight away. After quite a few years of this, I found that I was starting to lack enthusiasm for the road scene, particularly the constant required awareness of absolute pace times during training and racing. I had tried a few local trail races over the years while I was running on the road and just loved everything about them. I thought that a switch to trail racing would breathe new life into my running – and it did. It just so happened that just around the time I was considering switching to trail running that I started training with my current training partner, Oliver Utting, and he was a big advocate for ultra-running, so he strong-armed me into the ultra-running scene.

Mike: My first Ultra was the 2012 Meet Your Maker in Whistler. In hindsight, I was quite underprepared for that race. Thankfully, I didn’t really know what I was getting in to, so I didn’t worry too much about it beforehand. Up to that point in time I had really been a jack-of-all-trades, competing in a wide variety of events: triathlon, mtb, cyclocross, running (road and a bit of trail), swimming, bmx… Having been in a wide variety of race situations, I felt confident that i could adapt on the day and at least make it to the finish. Since MYM50 though, I’ve been hooked. My main focus now is on trail running and trail ultras.

How many times have you done Knee Knacker?

Oliver:  I have started the Knee Knacker 5 times and finished 4 times. I have been 2nd twice, as well as 3rd and 4th.

Graeme: I have run the Knee Knacker once, last year – well 7/8ths of it anyways.  I remember telling my wife after the race that I’d never run the race again. I didn’t quite say it as nicely as that though.

Mike: Last year was my first crack at the Knee Knacker [2nd place]. Maybe five or six years ago, I remember thinking how nuts people were to want to run from Horseshoe Bay to Deep Cove. Hearing stories from friends who raced it, it sounded like a really tough and punishing course. Little did i realize that ‘tough and punishing’ would become my fuel and motivation.

How have you prepared this year and have you done anything differently than in the past?

Oliver: The majority of my mid-week running is on the way to work, usually with a bike ride the other direction. I still train like a road racer so have been doing things like hill intervals at SFU up Nicole’s, tempos up the TransCanada trail at SFU, marathon pace runs, and 4-5 hr runs the North Shore – Ok, road racers don’t do the latter. My volume is pretty low compared to other ultra runners I think. I train a lot with Graeme Wilson and every time I think I have run a lot, it turns out that he has run more than me. If I get 70 to 80 miles in a week of running that is a pretty good week for me. I did my first 50 miler this year, so I am hoping that will help with the endurance for 50 km.

Graeme: The most important thing I’ve learned, particularly for a race like the Knee Knacker, is the rule specificity. I made the mistake last year of doing easy longish runs on technical trails, and almost all of my hard training on trails (almost groomed paths) with good footing.  That didn’t prepare me very well for extended length hard running on technical trails. I think that to maximize your potential on the Knee Knacker course, you’ve got to do at least some of your hard workouts on the race course, or on trails that are similar to the key sections found in the race. Whether doing short or long hill intervals, or extended duration tempo efforts, I think it is important to incorporate harder workouts on terrain that provides for constant variation of stride length and lateral movement while running hard while in a fatigued state. Having said that, I still believe it is important to get in once every 10 to 14 days, a solid extended duration tempo, or tempo interval workout either on flat ground or on long uphill road or trail stretches with good footing.

Mike: By the middle of last year, it became obvious that my running volume couldn’t  back up my desire. I barely survived the Knee Knacker. I hurt my knee in the race (how appropriate), and I struggled with that injury for the following 2 months. I just didn’t want to back off, and my knee took a long time to heal up. The big difference for me this year is that I have upped my running volume. Specifically, quality long runs in the 4-8 hr range. Besides that, my training is fairly similar to past years. I have always done a lot of cross training and strength work, and continue to do so. I’m really big on a ‘funnel’ approach to my training: a lot of variety when a race is still months away, but then slowly becoming more and more specific (to the physiological demands of the event) as the race gets closer.

Do you have any specific goals for the race?

Oliver: More than most other events, the Knee Knacker is a personal battle so I would like to beat my personal best time (4:57:56).  The terrain is so hard you really have to run your own race and not worry about everyone else. So I don’t really have a place goal. Of course, I would like to win but if I run a good race for me then I will be happy.

Graeme: To be honest, I feel a little weird talking about specific results, seeing that I had a DNF result last year. For me, it is all about the fun of racing others, and I hope to be in the mix with the leaders coming down into Panorama Park come race day.

Mike: I feel like I ran a really smart race last year and that I was able to leave everything I had out on course. I did make mistakes, but I did a great job of working through them. I’m sure everyone racing knows that it’s a roller-coaster out there (emotionally, physically, and gravitationally). You just need to keep working, smooth out the highs and lows, and get through the rough spots.  I would really like to be able to duplicate my focus and effort from last year, but obviously skip the hard crash I took on Hollyburn. I will have my best performance if I am able to slightly negative split the course; running quicker from the dam to Deep Cove, than from Horseshoe Bay to the dam. So to get to the answer, my goal for the race is to be disciplined and to focus on that process (neg split). Hopefully that will get me to the finish slightly quicker than last year.

Any tips for other runners doing Knee Knacker for their first time?

Oliver: Don’t start too hard, eat lots, drink even more, and don’t give up. And watch your step!

Graeme: A conservative effort over the first half of the course will very likely pay huge dividends on the second half. Check out the 2010 Knee Knacker results and look up Ellie Greenwood’s split times. No explanation needed.

Mike: My advice for any first time Knee Knacker is to get out on course before race day. Specifically, the first half. Knowing what you are in for while going up Black Mtn, and pacing yourself appropriately, will make the rest of your day so much more enjoyable!

if you’ve any tips to add, tell me in the comments below! Be sure to check out Chloe’s preview of the Knee Knacker women’s race as well, featuring Sam Drove, Kathy McKay, and Kim Magnus. Best of luck to all runners!