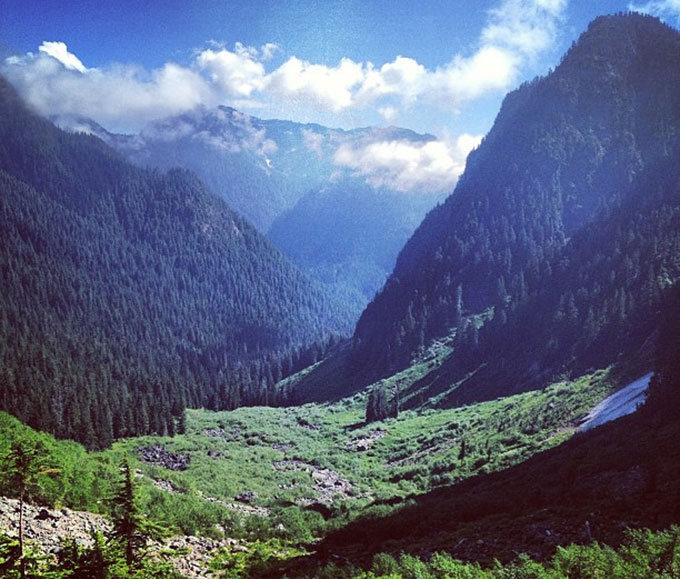 Hanes Valley is a favourite among local trail runners and it’s no surprise why. It’s essentially a backcountry route connecting Lynn Headwaters and Grouse Mountain, two more popular areas of our local trails, which gives you a real sense of isolation and adventure.

You can do it either from Grouse or via Lynn Valley, but most seem to prefer the latter. This allows for a nice warm up as you complete the relatively flat and familiar trip out to Norvan Falls before making your way up the valley to Crown Pass, around Dam Mountain to Grouse and finally returning downhill via Mountain Highway and the Baden Powell (or any other of the many routes back) for a full loop.

I’d made an unsuccessful attempt last Fall with my buddies Karl and (Salomon West Vancouver teammate) James, when early season snow made us turn back halfway. This was my last big weekend of training before Waldo 100k a few weeks later and with the route completely clear of snow it was a perfect chance to attempt the traverse again with Karl and 4 others.

Let me start by saying that the experience this time around was a lot different than last Fall, as you’ll see from some of the photos below.

We started our trip from the End of the Line Cafe, our usual meeting spot when running in the area, at the entrance to Lynn Headwaters Regional Park.

We then took Varley Trail across the bridge to Lynn Loop Trail which continues to follow the creek until the Third Debris Shoot when the trail begins climbing up to Norvan Falls, about 7.5 km from the parking lot. 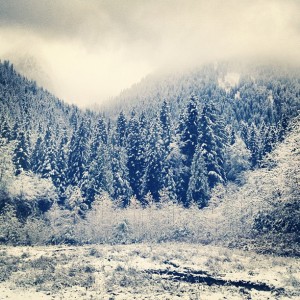 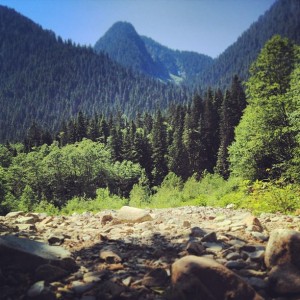 The falls to the right of the trail were pretty dry this time of year but can be quite spectacular in the wetter months and are especially beautiful when there’s snow.

Lynn Loop and the out-and-back to Norvan Falls has become such a staple of mine but crossing the metal bridge to the left of the trail felt more like venturing into the unknown. 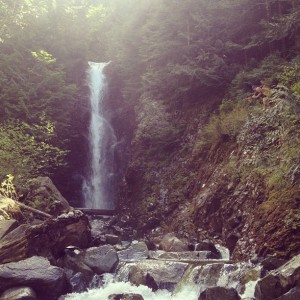 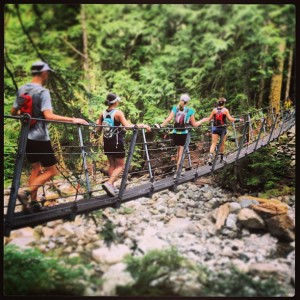 There are a couple of creek crossings on the next few kms into Hanes Valley. They were pretty easy to cross this time of year – nothing compared to the waist-high water we found ourselves in last Fall! 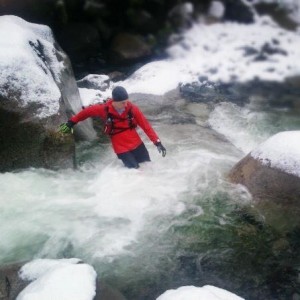 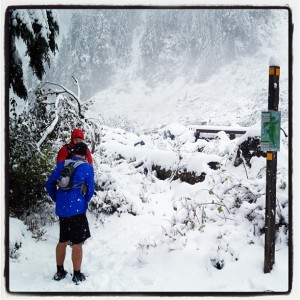 As far as we made it last Fall.

The route follows a beautiful trail through the forest before coming out into the open. This section was a little more technical and full of bugs – a few of us were stung by something nasty.

Eventually, we emerged into the Valley by the helicopter pad and supply cache where we stood in awe for a few minutes before beginning our ascent up Crown Pass. The next 1.5 km was a good scramble which rewarded us with an amazing view back down the valley (seen at the top of this post). 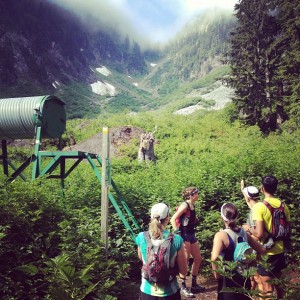 Assessing the task ahead: Crown Pass 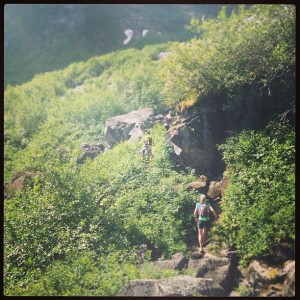 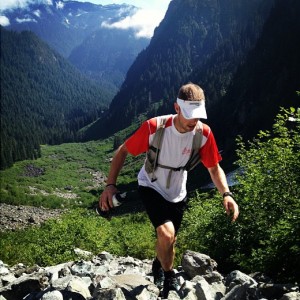 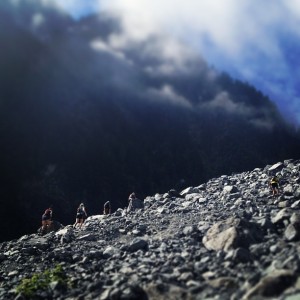 Scrambling up to Crown Pass.

From Crown Pass, we decided to do the out-and-back up Crown Mountain to the right. It was a pretty challenging scramble with about 400 m of elevation gained over 1.2 km but well worth the effort.

On a clear day, I’m told you have a panoramic view of the city in front and the mountain ranges behind, but the clouds were beautiful in their own way and left me with a reason to do this climb again one day soon. 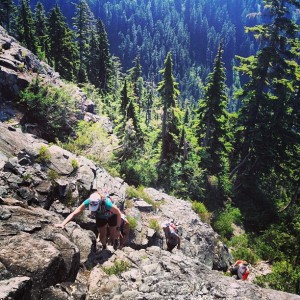 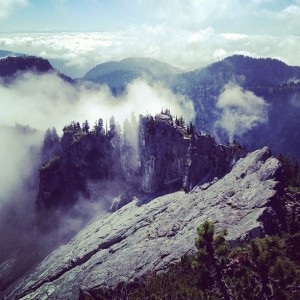 After having doubled back to Crown Pass, we were starting to all run a little low on water as we began the traverse past Goat Mountain, Little Goat Mountain and over Dam Mountain. Snow down the back from the few small patches that were left on the side of the trail offered a bit of relief from the heat.

This section of trail was quite picturesque but as we neared Grouse Mountain it became a little busy with hikers and tourists. 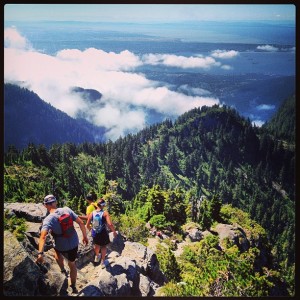 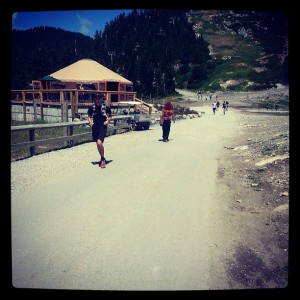 Coming in to Grouse.

The route ends up on the Grouse Snowshoe Grind trail and soon we were at Grouse Mountain Resort which provided a chance to refuel, rehydrate, and recharge before beginning our descent. 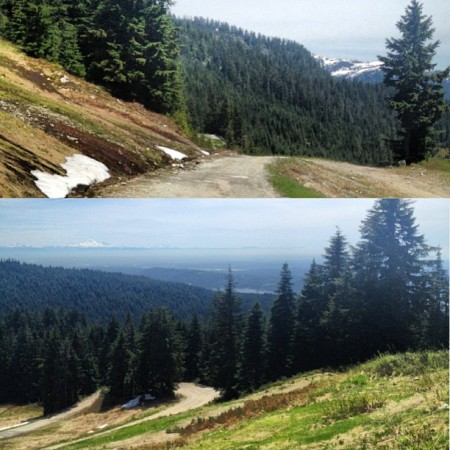 With the hard work behind us, we began our descent of Old Grouse Mountain Highway. This gravel road is always a great way to end a long day on the trails while you get lost in conversation and bust what’s left in the quads.

We eventually intersected with the Baden Powell Trail which took us back to Lynn Headwaters Regional Park and to our cars again along Varley Trail.

There is no shortage of return route options from Grouse. With a little more time, I might have taken the BCMC or Skyline to the base of Grouse and then hopped on the Baden Powell from there, or perhaps another of the mountain bike trails that intersects with Mountain Highway such as Bobsled.

6 hours and 15 minutes later, after roughly 1700 metres of climbing, we were back at End of the Line enjoying some well deserved ice cream, chips and homemade beer (thanks Karl).

I’m so glad to have tacked this route this season and I’m looking forward to making it an annual mid-summer adventure. And just when the weekend couldn’t get any better, I managed to squeeze in another great run the next day, on Sunday to Panorama Ridge and Garibaldi Lake (read that report here).