August 9, 2021 by Jeff Pelletier No Comments 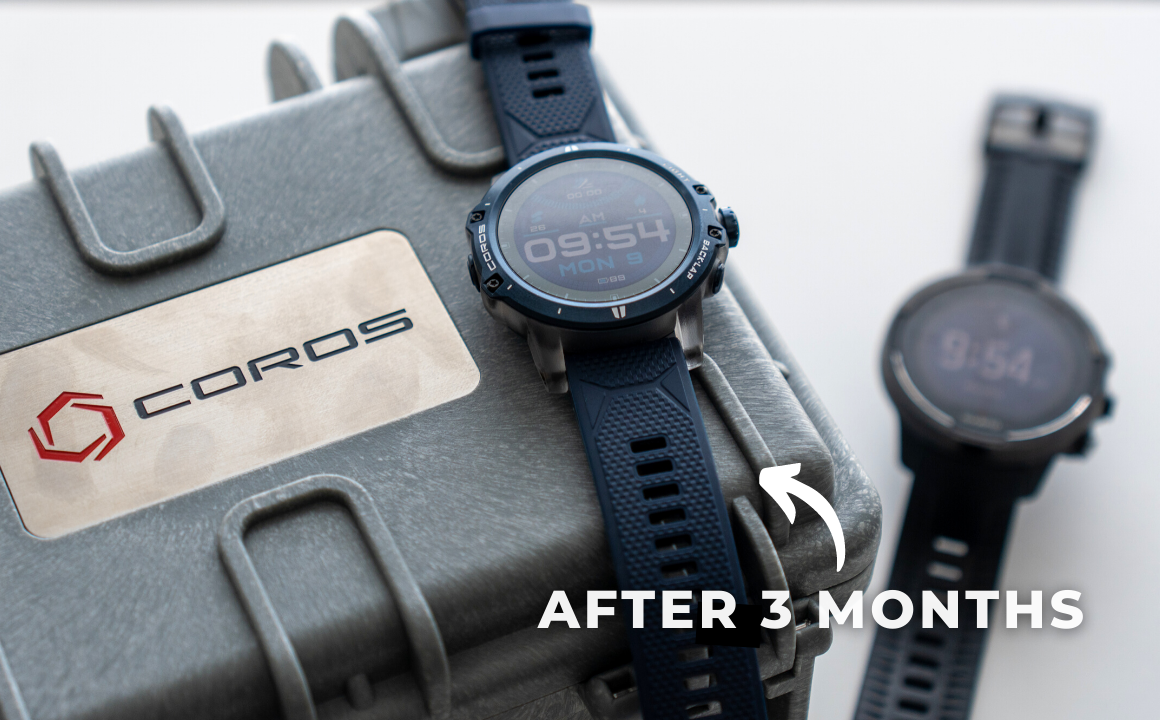 You might have noticed in a few of my films over the past few months that I’ve been wearing two watches and have wondered why. Well, I’ve been testing the COROS Vertix against my trusty Suunto 9 Baro, and I’m here today to tell you all about what I have found.

COROS first entered the GPS watch market with the PACE multisport GPS watch in May of 2018, followed by the APEX later that year. The model that I’ve been testing out is the COROS Vertix which was launched in May of 2019. This GPS adventure watch immediately began making waves in the industry thanks to its incredible battery life, and I seems to have been positioned to be a direct competitor to the Suunto 9 Baro.

Like most premium GPS watches on the market these days, the COROS Vertix is packed with features. But none of those matter in my opinion if the watch can’t perform in two keys areas which are battery life and GPS accuracy. For me, if a watch can’t record an accurate representation of my track and last long enough to do so then it’s of little use. So that will be my primary focus of this review.

Features of the COROS Vertix vs Suunto 9 Baro

There’s a handy chart on the COROS website comparing all of the specs and features of their entire line-up. But if you’re looking for a multisport watch that can keep up with the longest and most demanding ultra distance mountain and trail running activities, then trust me this is the one. Having said that, like the Suunto 9 Baro and other watches in its class, this is not a cheap watch. It is a serious investment.

Features Shared by Both Watches

Like the Suunto 9 Baro it has a touch screen which by the way you can disable as I’ve done.It similarly has Bluetooth connectivity, a wrist-based heart-rate monitor, a compass, an accelerometer, a barometer to help provide more accurate altitude readings as well as temperature, and a cadence sensor.

Both watches provide various reports on things like activity, calories, pace, steps, sleep, and so on.And of course it’s got an app for setting up and syncing your watch, just like the Suunto app, which can automatically sync to a number of 3rd party services like Strava.

Features Unique to the COROS Vertix

The COROS Vertix has some additional features that I love which the Suunto 9 Baro doesn’t. This includes Blood oxygenation levels. I haven’t played too much yet with this feature on this watch, but measuring blood oxygen saturation is something that I’ve done in the past when trekking at high altitude, so I could see this definitely coming in handy the next time I’m training or racing somewhere like Colorado. This feature has been added in the brand new Suunto 9 Peak, but isn’t available on my Suunto 9 Baro.

It’s got an autolock feature. On the Suunto 9 Baro, you need to hold down the lock button for 3 seconds to lock it, whereas on the Vertix you can have it lock automatically to make sure you don’t accidentally pause your recording. To unlock it you use the dial. The dial has a nice, tactile response, even with gloves on.

It’s also a lighter smaller and a little lighter than the Suunto 9 Baro, at 74 grams vs 78 grams for the Suunto 9 Baro. The strap has a bit more flexibility in it as well, and I think that women in particular but really anyone with smaller wrists will prefer the feel of the Vertix.

It’s got ANT+ technology to support older accessories which was removed in recent Suunto watches. I do have an old ANT+ cadence meter for my bike which I could see actually using again in the future now that I have a compatible watch.

Compare prices for the COROS Vertix at various online retailers.

You can update the firmware straight from the app, again something that has been added to the Suunto 9 Peak but isn’t available in my Suunto 9 Baro which still requires using the Suunto Link app on my desktop computer.

It’s also got a cool feature which allows you to stop and then resume later an activity without having to leave it paused like you would on the Suunto 9 Baro. This could be useful for multi-day events where you’d prefer to have a single track instead of a separate recording for each day, or even just if you’re not yet sure whether you’re going to be taking a short break or stopping completely.

The main difference though between these two watches is in battery life. The Suunto Baro 9 has a pretty decent battery life of up to 25 hours at full GPS, but it’s really easy to extend this while maintaining the highest level of GPS accuracy.

I use a custom battery mode on the Suunto 9 Baro for my longer events with the watch set to Low Color mode, the Display timeout enabled, and both the heart rate sensor and touch display disabled which gets me about 42 hours hours, which is more than enough for a 100 miler. For a 200 miler or a multi-day event, I then just need to charge the watch a couple of times with a battery bank. And this has allowed me to record some pretty incredible looking tracks, including Tor Des Geants and the Swiss Peaks 360k.

The COROS Vertix on the other hand boasts a pretty incredible 60 hours of battery life in full GPS mode, and again I think you can extend this a little further by turning off features like the heart rate monitor.

While I haven’t needed to run it continuously yet for 60 hours, the extra battery life on this thing really does help just take away the pressure to have to remember to charge your watch all the time in-between uses. The average runner could probably go a couple of weeks in-between charges.

GPS Accuracy of the COROS Vertix vs Suunto 9 Baro

I compared the watches on 12 runs, ranging in distance from about 20 km to 100 km. For each of the runs, I wore my Suunto 9 Baro on my left hand as I always have, and my COROS Vertix on my right to avoid any interference between the two watches. I set the COROS for Right-handed Wrist Hand mode and turned off the heart-rate, since I wanted to focus on GPS for these tests, but left all other settings pretty much at default.

I kept both watches up to date at all times with the latest firmware, and I always synced both watches with their respective apps before leaving for my run to ensure that I had the most recent satellite data. Both watches were always fully charged, and both on the default Best GPS accuracy settings, using the Trail Running sport mode.

All of these runs were done in challenging conditions from a satellite coverage stand-point, including tree cover, river valleys and canyons, steep slopes and alpine terrain. There’s very little road running here, so it’s safe to say that I really put both of these watches through their paces.

Overall, there was very little difference between the two tracks, with both watches performing really well. But there were a couple of cases on longer runs where I did temporarily lose GPS on the COROS.

This is a chart showing the distance and elevation gain recorded by each watch on these 12 runs. In almost all cases, the COROS reported around 5% less distance than the Suunto, and the two cases where it did report significantly higher distance were where it had lost GPS signal.

The difference in elevation was a little less consistent, although in most cases the value from the Suunto seemed to match more closely with the watches of the other runners I was with as well as my expectations for a given route.

One thing to note is that this left the COROS Vertix on its default of what’s called 3D Distance mode which uses elevation gain to calibrate the distance compared to 2D distance.

I originally assumed that 3D Distance would provide better accuracy, but the documentation does say that this is ideal for cases when both speed and elevation gain are both high like with skiing. So it’s possible this led to some variation in data recordings, although shouldn’t contribute to any actual loss of GPS signal where that did occur.

Areas for Improvement on the COROS Vertix

I’d have to say that the GPS accuracy of the COROS Vertix is pretty good in most cases, but not great in terms of consistency, based on my results.

My Suunto 9 Baro has just been so reliable for me over the past few years, that I’m just not sure I’m ready to make the switch, especially for races where an accurate track is so important for me, despite the huge improvement in battery life.

I should point out though that not everyone I know has had such a good experience with their own Suunto 9 Baro, while others have had much better results from the COROS Vertix, so you might want to take my results so far with a grain of salt.

While you can import GPX files and create routes from previous runs you’ve recorded using the COROS, there’s no route planner in the app itself, unlike the Suunto app. This to me is the biggest limitation of what is otherwise a really great app.

I find it actually syncs much faster than the Suunto Baro 9, and it actually prompts to sync if you haven’t in over a week to ensure that you have up-to-date satellite data. But as I talked about in this video about the apps that I use for navigation and route planning, I’ve really begun to rely on the Suunto app to design routes on the fly. So I’d love to see some further development here.

The options for interval training are quite limited as well. I use this feature a fair bit when doing hill repeats on my Suunto 9 Baro, and I can only seem to access it when using the basic Run mode but not in Trail running mode on the COROS Vertix.

I did find the interface a little overwhelming and difficult to use at first. In my experience with Suunto watches over the years which themselves used to be much more complex, many people aren’t really willing to spend the time to really dive in and customize features and they tend to just use the same couple of options all the time, so I think it’s important to make things as simple and intuitive as possible for the average user, both on the watch and the app.

I’d love to see topo maps built right into the watch, like on the Garmin Fenix. This is a feature that was introduced in the Suunto 7 last year, but the drawback with that watch of course is its abismal battery life of something like 12 hours.

Given the incredible battery on the COROS VERTIX, if they were to incorporate top maps, I think this would be a game changer that would really separate it from the competition.

Lastly, and this is a very small thing, no pun intended, the little cap that covers the charging port is tiny and really easy to lose track of. Assuming that it is important and meant to keep out debris, then maybe a little flap to attach it to the back of the watch would keep from losing it so easily.

Overall, this is a really impressive watch, and I have to assume that both Suunto and Garmin are watching COROS pretty closely, and it will be interesting to see what comes next. I’d love to hear about your own experience with either of these two watches in the comments below.

Compare prices for the COROS Vertix at various online retailers.