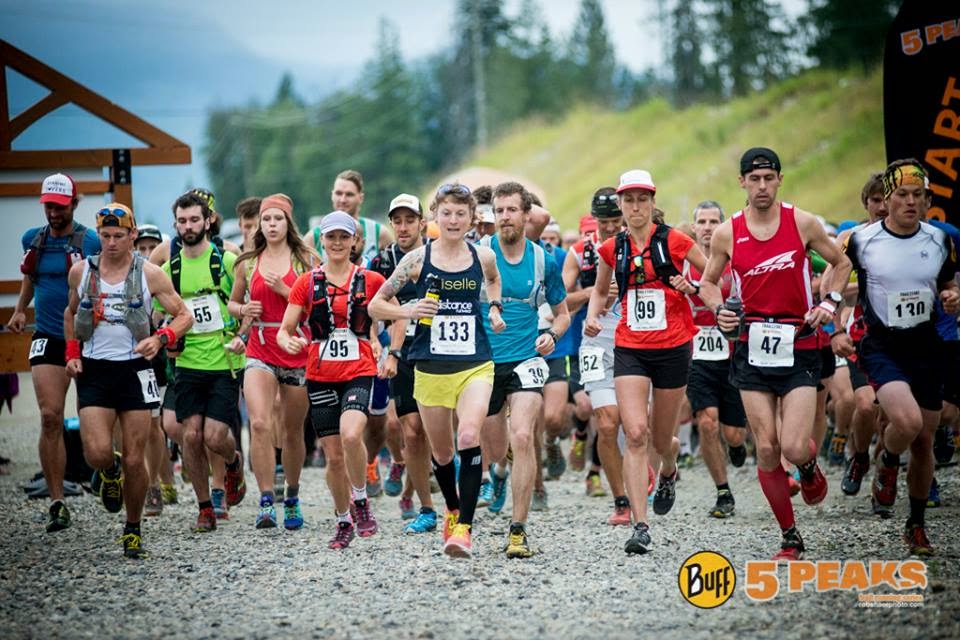 Earlier in the year, my good friend and Salomon West Vancouver athlete James Marshall briefed me on a brand new race he’d been asked to help design the course for, full of (yes!) ridge running. The event promised an entire weekend of trail running, expos, great food, and amazing views in beautiful Revelstoke, BC. How could I resist signing up for the inaugural 5 Peaks TrailStoke Ultra & Relay on July 19th?

TrailStoke was planned as an “off-distance” 60 km course with roughly 3,000 metres of elevation gain, taking runners first from the ski hill base at Revelstoke Resort to the top of the mountain, followed by 30 km of up and down through the alpine and on a beautiful ridge, and then back to the base.

It would be the first Skyrunning event in Western Canada, acting as the Canadian Long Distance Mountain Running Championship with entries given to the top Canadian male and female finishers for the North American Championships at the Pikes Peak Marathon in Colorado.

After making the 6.5 hour drive from Vancouver on Friday, we set up our tent at the nearby KOA campground (the closer Williamson Lake campground was full) and made our way to the Sutton Place Hotel at the base of the mountain for package pick-up and check-in. To say that the Vancouver trail running community was well represented would be an understatement! It made me glad I wasn’t missing out on the party.

We then took the gondola up to the Revelation Lodge for the speaker presentations which included Melanie Bernier, Max King (who’d go on to take the win) and Adam Campbell. This was followed by a mandatory pre-race safety briefing that drove home some of the realities of mountain running, including being prepared for the weather, remoteness, and wildlife. Definitely the first time I’ve had to carry bear spray during a race!

As Trail Running Canada reported, on Saturday the race “began with a bit of uncertainty due to the weather, bear activity and course re-routing. The original 60 km route had been revised with an estimated 53 km distance the night before, but eventual heavy rain, sleet and sketchy ridge snow pack reduced it further to approximately 48 km in the end. As with most ultras not too many racers seemed fazed by this reduction in distance, perhaps a welcome relief to some.”

My own race began with even more uncertainty, when the van that was bringing us from the base to the first transition point spontaneously combusted half-way to the top of the mountain, sending flames through the passenger side windows and cargo door. After a pretty quick exit through the driver’s side door, the 10 or so of us started to make our way on foot – I needed a warm-up anyway. Fortunately, after just a few km of hiking, a group of us were able to jump on the back of a somewhat overloaded pickup truck, a few hanging off the rear bumper. I made it to the transition at Aid Station #1 with moments to spare as Ian flew in just under 2 hrs after he started at 6am, in 5th place. 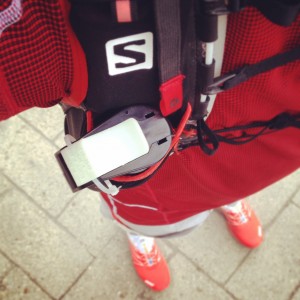 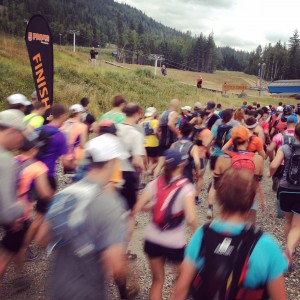 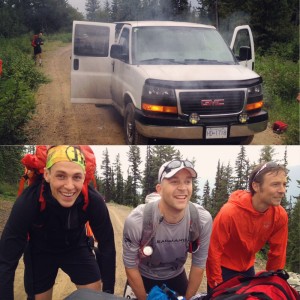 Adventurous start to the race. 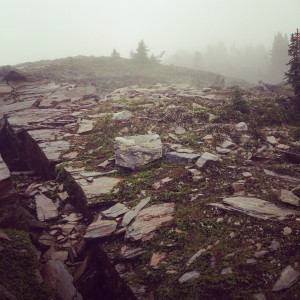 Climbing a ridge through the fog in Revelstoke.

The rest of my leg went pretty much as planned.

After climbing up the rest of the ski hill to the second aid station, we hit the technical stuff that included overgrown single-track, muddy bogs, and loose slate with snow and all sorts of weather. Climbing along the ridge through the fog, I got my first taste of what a true European-style mountain race is all about, with the unpredictable weather that comes with it.

On my way back, I had a chance to run with Salomon Flight Crew teammate and speedster Andy Reed for a while which was great – until he dropped me to go on to finish second masters in exactly 6 hours.

I did manage to go off-course a little, while daydreaming and not paying enough attention to the amazing flagging (thanks to Devin Featherstone) as it turned uphill instead of continuing down, adding around 50 metres of climbing. I somehow also managed to trip on a submerged log in some ankle-deep mud causing me to body check the very large puddle of said mud. In other words, business as usual and all in good fun.

I finished my leg in 2 hrs 45 mins, which turned out to be just under 21 km and with 1,417 metres of elevation gain, for 2nd place. I then did a little 8 km ‘cool-down’ run back to the base to catch Ian finish the third leg in 1 hr 10 mins for 7th. This brought our total time to 5 hrs 55 mins, good enough for 4th place overall – not bad for a two-person team!

The post-race expo included booths by some local retailers, food, a bar at the lodge where you could purchase drinks, and interviews from racers over the mic. It all helped to keep everyone entertained and in one place as we welcomed the rest of the runners to the finish line. 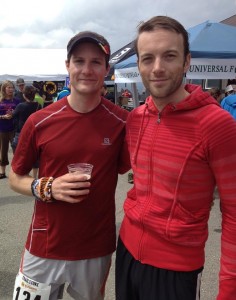 After lunch back at the base, showers, and a dip in the hot-tub at the Sutton, we took the gondola back up to the Revelation Lodge for the post-race dinner and awards ceremony which included a BBQ, photo presentation from the race, and a live band. The party was a great way to wrap-up the weekend and to cap off the race, instead of everyone running off right away – something that 5 Peaks is really good at with all of their events.

Some 130 solo runners and 28 relay teams finished the race which certainly wasn’t without its hick-ups, as can be expected with any first-year event. Overall though, the course and event definitely has huge potential to become a really great destination race as the organizers sort out a few details and continue to iron out the course in the coming years (they’ve already pushed next year’s race to late August to avoid the snow). The community in Revelstoke were more than accommodating and definitely showed their support for the event.

We may not have gotten the views we’d hoped for, but I suppose that’s all the more reason to come back next year to run it solo!

Congrats to Max King and Vancouver’s Anne-Marie Madden on the win! Be sure to check out Chloe’s race report, as well as Trail Running Canada’s comprehensive report on the race. Full results from both the ultra & relay can be seen here. Header photo ©Rob Shaer 2014.